From the day we're born, we're social beings. With that in mind, we want to take a look at the different theories that explain social development. 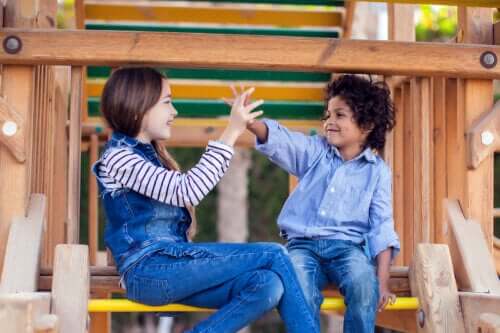 There are several different theories that explain social development. These explain how the social environment influences a child’s development on a cognitive, emotional and social level.

From the day we’re born, we’re social beings destined to live in a social world. For that reason, we need other people to develop and evolve.

From the time they’re babies, children grow and develop, becoming who they are through interactions with other people in a continuous process of socialization. In this sense, different factors, like the presence and actions of others, influence little ones; and, in turn, this influences and determines the behavior of others towards them.

There are different theories that explain social development and how interaction with others influences a child’s cognitive, emotional and personal development. Among them, we can mention those of Lev Vigotsky, Erik Erikson and Urie Bronfenbrenner.

Lev Vigotsky was a Russian psychologist and a precursor of social constructivism. He based his theory on socio-cultural learning, considering the social environment as fundamental for children’s learning. Therefore, learning is the integration of two factors: social and personal.

Vigotsky worked on several concepts in order to understand the social development and learning of children. Below, we’ll look at each of them.

According to Vigotsky, there are two types of mental functions:

In a child’s cultural development, mental functions develop and appear twice. First, they appear on a social level and then on an individual level.

“Every function in the child’s cultural development appears twice: first, on the social level, and later, on the individual level; first, between people (interpsychological) and then inside the child (intrapsychological). This applies equally to voluntary attention, to logical memory, and to the formation of concepts. All the higher functions originate as actual relationships between individuals.”

Therefore, the ZDP is the time when learning takes place. It allows children to progressively develop their higher mental functions.

According to Vigotsky, psychological tools are all those objects that serve to externally organize information. For example, symbols, writing, works of art, drawings, language, etc. Language is considered the most important tool, as it’s the medium through which children communicate with their social environment.

We can say that psychological tools are the bridge between lower and higher mental functions. They mediate our thoughts, feelings and behaviors.

When we’re born, we have only inferior metal functions, as the superior ones haven’t developed yet. As little ones interact with others, learning takes place. Thus, children learn through instrumental and social mediators.

However, what we learn depends on the psychological tools that we have. And, in turn, these depend on the culture in which we live. Consequently, our ways of thinking, feeling and acting are culturally mediated.

Like Vygotsky, Erik Erikson gives special importance to social and cultural aspects in the development of personality. Erikson developed the psychosocial theory. In it, he describes eight stages (conflicts) that occur from childhood to old age. Social interactions influence these stages and each of them presents a new challenge (conflict between social needs and demands) that the person must resolve.

“There is in every child at every stage a new miracle of vigorous unfolding.”

Bronfenbrenner proposes an ecological perspective on the development of human behavior. His theory states that development and learning are products of the interaction of subjects with their environment. For this reason, a child’s environment and all the systems they’re a part of influence their cognitive, moral and relational development.

The ecological environment proposed by Bronfenbrenner is a group of systems with different levels. What’s more, these levels are interconnected; each level contains the other and they depend on each other.

Systems of the ecological theory

“We as a nation need to be re-educated about the necessary and sufficient conditions for making human beings human. We need to be reeducated not as parents, but as workers, neighbors, and friends; and as members of the organizations, committees, boards – and, especially, the informal networks that control our social institutions and thereby determine the conditions of life for our families and their children.”

Vygotsky and the Psychology of Play
Lev Semionovich Vygotsky was a Russian psychologist and forefather of his specialty. He's best known for his work in the psychology of development. Read more »
Link copied!
Interesting Articles
Childhood psychology
Childhood Schizophrenia: Symptoms, Causes and Treatment