The Theory of the Mind: What Is It?

Before children develop their social abilities, they must acquire the Theory of the Mind. In today's article, we'll help you learn all about this interesting concept. 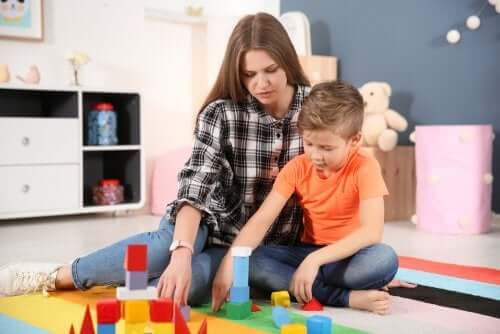 The theory of the mind is the ability that allows us to attribute mental states to ourselves and other people. Thanks to this ability, we can capture what people believe, think and want… which gives us the capacity to predict and understand their behaviors.

This ability is innate to human beings. That being said, it doesn’t start to develop significantly until we reach the age of 2. From this point on, children begin to acquire the imaginative skills to create stories and of symbolic play.

These inventions continue to evolve gradually until finally reaching a fully developed Theory of the Mind.

“The ability to put oneself in someone else’s shoes is one of the most important functions of intelligence. It demonstrates the level of maturity of human beings.”

The origin of this concept: An experiment with chimpanzees

This complex cognitive capacity is something that only human beings possess, as well as some apes. Premack and Woodruff were the first to suggest the Theory of the Mind. These two researchers carried out an experiment in order to demonstrate that chimpanzees could also comprehend the human mind.

In order to conduct their research, they selected a chimpanzee from their laboratory that was in frequent contact with human beings. They showed the animal a video in which one of its carers appeared inside a cage, trying to grab a banana that was out of reach. In order to reach the banana, the person could use certain instruments that were nearby.

Just when the human was about to grab the banana, the researchers would stop the image and then show the chimpanzee two different photographs. One of the pictures would show the correct solution to how the person would accomplish his goal.

The chimpanzee chose correctly the majority of the time. Therefore, the researchers concluded that the animal possessed the Theory of the Mind. The chimpanzee was able to guess that the human wanted to reach the banana and it knew how to go about it.

Problems in the development of the Theory of the Mind

The Theory of the Mind makes up part of our social development. Therefore, if we don’t acquire this ability, it affects our social life.

Such is the case of individuals with autism spectrum disorder (ASD), who don’t manage to develop this cognitive ability in an innate manner. This deficit greatly explains the social difficulties that these individuals experience.

Therefore, as a consequence, they may display difficulties in the following areas:

For example, there are a number of organizations that offer programs to help families. The internet is also a place where you can find a wide variety of materials and ideas for developing this ability in an attractive and effective way.

However, the best way to intervene in the reeducation of children with autism is with a professional… in order to work on this area or any other.

To conclude, the Theory of the Mind helps us comprehend the people we interact with on a daily basis. It’s an essential ability when it comes to developing empathy, active listening, and assertiveness.

“Open your mind, get to know yourself, seek out other points of view, and you’ll come to understand others.”

This is the secret to developing satisfactory social relationships with others.

Discover How a Child with Autism Sees the World
It's never easy to imagine how others see or experience the world. Even more difficult is to put ourselves in the place of a child with autism and understand how they perceive their surroundings, how they feel and what they think. Read more »