Help! My Child Swallowed a Coin!

"My child has swallowed a coin!" Don't panic, here are some suggestions on how to act and how to prevent these scares. 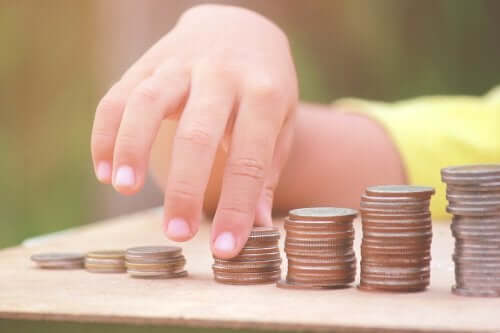 In this article, find out what to do if your child has swallowed a coin. This type of accident is more frequent than you might imagine.

Until 5 years of age, little ones put pretty much everything in their mouths, regardless of whether it’s food or not. On many occasions, they end up swallowing it, either accidentally or voluntarily.

The first thing you should do is to remain calm. If you scream at your child and get into a panic, then, in addition to your child being scared, he or she could choke and you could make things worse.

In most cases, you don’t have to worry. In many cases where children have swallowed a coin or another object, this foreign body ends up passing into the intestine. It then leaves through the feces after between 5 and 7 days.

It’s very important to determine where exactly the coin is. This will decide whether there could be complications, or whether it’ll just be one more story to tell. To know for sure, you’ll need to visit the emergency room for them to carry out an X-ray.

If it’s in the esophagus, which occurs in 20% of cases, then they’ll need to remove it in a maximum period of 24 hours. This is because there’s a strong risk of perforation or aspiration and suffocation in these cases. This type of extraction is performed with an endoscopy.

If the child has swallowed a coin and it’s entered the stomach – which occurs 60% of the time – then you’ll have to take into account factors such as the coin’s size and the child’s age. For small children (less than 2 years of age), all objects larger than an inch should be removed.

On the other hand, if the children are older, then the size limit increases to 2 inches. If the coin is larger than this, then it won’t be able to pass through the pylorus. This would then have serious consequences.

In the other 20% of cases, the coin reaches the intestine. Once it reaches this point, then there is a very low risk of things getting complicated.

As we mentioned before, the best thing to do is to go to the emergency room. They’ll be able to diagnose the seriousness of the matter. If the child has difficulty speaking, breathing or even if there is a loss of consciousness, call for the emergency services immediately.

Once the doctors have carried out all the relevant tests, and the object doesn’t need to be removed, then it’s advisable for the child to drink plenty of water and a diet rich in fiber (fruit, vegetables, prunes, etc.). This will facilitate the expulsion of the objects through their stools.

If the coin is in the esophagus, which occurs in 20% of cases, then experts will need to remove it within a maximum period of 24 hours.

You’ll need to be vigilant every time your child goes to the bathroom, in order to make sure the coin or other object has left their body. If this is the case, then they won’t require hospital admission. You’ll only have to keep a check on them.

If there’s any change in their behavior, or symptoms such as vomiting, abdominal pain or blood in the stools, then you should return to the hospital immediately.

Other objects that can be swallowed

There are other types of objects that are worth mentioning, since their ingestion could cause serious complications:

Better to be safe than sorry…

Now that you know how fond children are of putting everything in their mouths, you’ll need to take safety measures to avoid possible accidents. For example, never leave small objects or medicine within their reach.

At the same time, explain to them what kind of objects they should avoid putting in their mouths and make them understand that they could swallow them and hurt themselves.

You should always adapt this advice to their age, expressing it clearly and without frightening them. Finally, always make sure you choose toys that are suitable for their age.

4 Household Accidents that You Can Avoid
Household accidents involving children are common. However, there are ways that you can make your home safer and protect your little ones from harm. Read more »
Link copied!
Interesting Articles
Childhood psychology
Rituals to Help Your Child Say Goodbye