Books created for teenagers are full of values and have a positive impact on their mental development. We'll discuss 10 book series for teenagers in this article. 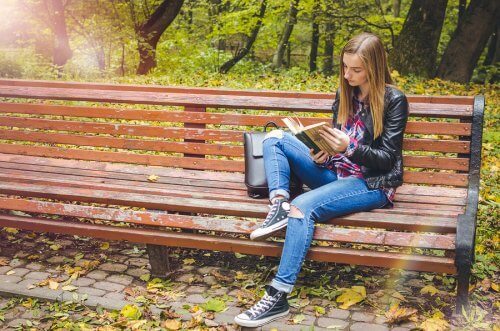 Reading books is an excellent way to channel emotions and explore tastes and interests in a creative way among teenagers. There are many book series for teenagers that cover a wide variety of genres.

There are book series for all tastes and interests: adventure, fantasy, mystery, terror, friendship, and love. Here, we’ll take a look at some of them.

Little Artemis is 12 years old and has already become an expert gold thief. Who does the gold belong to? Magical beings and humans. His faithful steward also tells his point of view. The counterpoint is given by his faithful steward. He tries to show Artemis his noble ideals.

Percy Jackson and the Gods of Olympus by Rick Riordan

Percy Jackson’s monotonous life changes drastically when he discovers that his father is Poseidon, the Greek god. From that point forward, his adventures revolve around catching a thief who has stolen Zeus’s master bolt.

Daughter of Smoke and Bone by Laini Taylor

Book series geared toward teenagers also have female protagonists. Karou, the main character of this trilogy, studies art in Prague. However, the story isn’t centered around her everyday life, but around the mystery and monsters that surround her life.

Dragons are close to becoming extinct and Jacinda is one of the last humans capable of acquiring their form. After migrating to human lands, she must contain all her dragon abilities so that she’s not hunted down. To make matters worse, among so many adversities coming her way, she ends up falling in love with a dragon hunter.

The Hunger Games by Suzanne Collins

The Hunger Games trilogy is one of the best-selling teen book series in recent years. The science fiction components for a dystopian future make the main character, Katniss Everdeen, very familiar and seductive.

This series is composed of five chilling volumes. The protagonist, Dan Crawford, is a conscientious science and history student. When his usual summer program housing closes down, he and fellow students have to live in another dorm. However, that dorm used to be an old psychiatric hospital. And from there the nightmare begins.

This is an intriguing story that stars Yelena, a young girl convicted of murder. To be released from jail, she must accept a deal that puts her life at risk every day. Along the way, she acquires magical powers and sets out to free her people. Undoubtedly, it’s one of the book series that has more character depth.

Thirteen Reasons Why by Jay Asher

This book is presented as a song to true friendship. It all starts when Clay Jensen receives cassette tapes from Hannah Baker, a friend who had committed suicide a few days before. The whole plot centers around those tapes, with the dramatic voice of one who explains the reason she killed herself.

This is another popular dystopian series among teenagers. The protagonist, Beatrice Prior, lives in a society divided into 5 factions: Candor, Abnegation, Dauntless, Amity, and Erudite. Beatrice must choose to stay with her current faction or transfer to another one. Her choice shocks both her and her community.

The Fifth Wave by Rick Yancey

The protagonist, Cassie Sullivan, is a young woman who has been practically alone and endures the constant alien invasion. Her need to mature is inevitable as she embraces her destiny. It’s a story of profound psychology and ideal for teenagers.

In short, we have an incredible variety of interesting book series available to teenagers. The dystopian, fantastic, futuristic, or daily scenarios serve as a framework to deepen the discovery of young people.

The idea is to not only start reading, but to develop a continued interest in reading. These book series for teenagers meet all the requirements to read, learn and grow.

5 Activities That Promote Reading Among Teens
It's important to be tactful if you want teens to become interested in something. There are certain activities you can use to promote reading among teens. Read more »
Link copied!
Interesting Articles
Parenting
What Is Platonic Co-Parenting?