Parents who are overcritical make their children feel like they're inadequate and incapable. This can leave lasting emotional scars that have many repercussions in adult life. 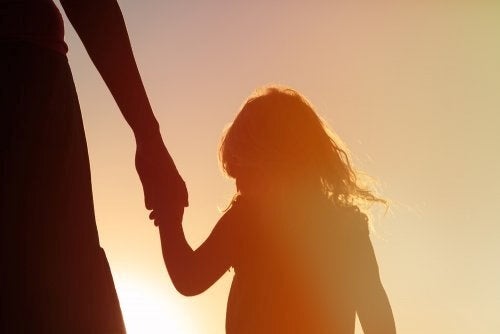 We take on a big commitment when we decide to become parents. We become responsible for raising emotionally healthy human beings. Unfortunately, not every parent takes this approach with their children.

For example, growing up with overcritical parents has serious consequences. It can have negative effects on the emotional health of a person and their quality of life.

There’s a lot of hurry and stress in our society today. Many times, parents seem to be on autopilot and they’re unable to pay complete attention to all the areas of their lives.

Nonetheless, it’s vitally important that we prioritize our role as parents. We need to be conscious of how we’re raising our children. Our actions can’t just be automatic when it comes to parenting.

Otherwise, if children don’t receive the affection, respect, and validation they need from their parents, they’ll have difficulties finding happiness in all their life relationships.

Critical family environments have a negative impact on children because criticisms are detrimental to their personal development. Children who have critical parents lack confidence in themselves and adopt the behaviors of people with low self-esteem.

These children will learn to feel inadequate and incapable. They’ll find it difficult to leave their family. Children of overly critical parents feel anxious at the idea of being independent, and they’ll feel they can’t get ahead without their parents.

Overcritical parents also tend to be overprotective and have weak control over their own emotions. They make their children feel guilty for putting up any resistance or for defending themselves.

Some parents are also overprotective in unhealthy ways. They want to protect the child from every potential danger. These parents perceive the world as full of threats for their children.

Therefore, they try to anticipate any and all potential problems. They avoid giving the child responsibilities because “they will suffer enough when they are older.”

Although unintentional, this diminishes children and their capabilities. And when the children have to face life’s difficulties, they’ll lack the resources and the self-esteem necessary to overcome them.

They’ll experience great levels of anxiety and they’ll largely depend on their parents, even in adult life.

On the other hand, there are also parents who don’t know how to adequately manage their own emotions. They tend to be people who aren’t in touch with their own feelings and who have difficulties in identifying them. They also have difficulty in expressing and regulating their emotions.

It’s very hard to transmit positive messages in these kinds of surroundings. When a child becomes emotional, overcritical parents either ignore it or minimize it. They diminish the value and relevance of the child’s feelings, and they may even react with annoyance or reproach.

As a consequence, the child receives the message that his feelings aren’t worthy of attention or respect. He comes to understand that he won’t get any sympathy when he expresses his pain. He learns that he’s likely to find rejection.

Logically, children who grow up under these family conditions have a tendency to completely inhibit their emotions. When they do have emotional moments they’re often extreme and out of control because they never learned to manage their emotions.

The result of raising children in such critical environments is often over-dependence on their families. Both the children who grows up hearing that everything they do is wrong and the children who are seen as incapable and thus never allowed to do anything themselves share the same fate.

With the passing of time, these children will have serious difficulty in establishing healthy relationships. They’ll develop a tendency toward emotional dependence, in the first case, and the avoidance of intimacy in the second.

On the other hand, they’ll feel bound to their nuclear family, to the point where their individuality is limited. The idea of facing life without their family’s support seems terrible to them, and their family feeds this dependency over time.

Overcritical parents often use their children as an excuse to avoid their own problems.

For this reason, it’s essential that we put all our effort into raising children who are emotionally healthy and autonomous.

We should be attuned to their feelings. It’s important to understand and value them as a first step in developing their self-esteem.

10 Tips for Preventing Childhood Sexual Abuse
Have you taken the time to teach your children about sexual abuse, as well as ways to identify and prevent it? You'll find recommendations on this topic here. Read more »
Link copied!
Interesting Articles
Emotional education
Solomon Syndrome in Children: What Is It? How Can You Avoid it?