Which Groups Are Most Vulnerable to School Bullying

Knowing which groups are most vulnerable to school bullying is essential in order be attentive to the problem and prevent it from occurring in educational institutions. 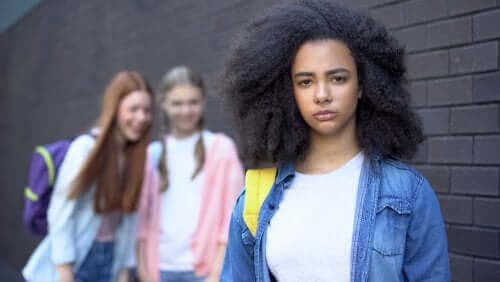 There are children who are more vulnerable to school bullying because they exhibit certain personal or contextual characteristics that bullies believe make them inferior. We can’t allow this to happen.

It’s essential that we protect the rights of minors so that everyone can grow up with dignity and free of discrimination. To do so, we need to be aware of which groups are most at risk of school bullying.

“So long as little children are allowed to suffer, there is no true love in this world.”

Which groups are most vulnerable to school bullying?

According to psychologist Rosa Serrate, the potential victims of bullying are usually children with a disability, a specific physical appearance that attracts attention (obesity, short stature, a certain hair color, etc.), those who belong to another ethnic group, have a different political ideology, have few friends, are shy, those who are going through a time of low self-esteem, or those who have difficulties developing their social, motor, intellectual, or verbal skills.

Among all of them, there are four groups that are most vulnerable to school bullying. Below, we’ll explain who they are.

It’s important that you’re aware of these groups so that you can pay more attention to the interactions of these students with the rest of their classmates. And, in doing so, help to prevent bullying and assure that your school is an inclusive institution where all students belong.

Unfortunately, in recent years, xenophobia among young people is on the rise. As a result, foreign or immigrant students are more prone to exclusion by their peers and to harassment. So, racist or xenophobic bullying refers to situations where the victim suffers attack for reasons such as the following:

Gay, lesbian, bisexual, transgender, and intersex children and youth may suffer harassment and stigmatization by their peers who perceive them as undesirable. Therefore, the following terms apply to the bullying that LGBTQ students experience.

In addition, according to Pichardo-Galán, De Stéfano-Barbero, Faure, Sáenz, and Williams-Ramos, victims of homophobic and transphobic bullying experience exclusion in every social context and space in their daily lives.

This is true to such a degree that they often decide not to tell anyone about what’s going on for fear of not receiving support from their families. This factor is less common when it comes to bullying that occurs for other reasons.

Girls are also more vulnerable to school bullying than boys. This is due to the sexism that’s still somehow present in society. This sexism maintains the inequalities that exist between the sexes and perpetuates the patriarchal power system.

Therefore, sexist or gender bullying is produced by men towards women. This is due to an attitude of prejudice and discrimination based on a supposed inferiority of women with respect to men.

Students with special educational needs are another group that’s most vulnerable to bullying. Thus, children with disabilities, both physical and intellectual, emotional, sensory, etc., are at greater risk of being bullied because they present a series of difficulties or challenges.

How to Prevent Bullying in Elementary Schools
Bullying in elementary schools is an unfortunately common issue. We'll explain more about this in this article. Read more »
Link copied!
Interesting Articles
Responsibilities and values
Global Citizenship Education: What You Should Know

Responsibilities and values
Equality and Equity: Explaining the Difference to Children

At present, attempts are being made to give equal or fair treatment to vulnerable groups in society. This is the…