"Rock, Paper, Scissors" is a perfect tool for developing emotional intelligence in children. No, we're not talking about the game, bur rather a short film against school bullying. 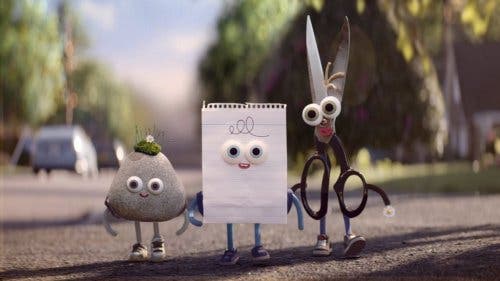 The term bullying refers to psychological, physical, and emotional mistreatment among school students. To prevent bullying, it’s crucial that parents and educators instill certain values in their children from a young age. And that’s exactly why we want to talk about Rock, Paper, Scissors, a short film about bullying.

“No one can make you feel inferior without your consent.”

Audiovisual media as a tool in the prevention of bullying

When it comes to school bullying, aggressors try to intimidate, ridicule, submit, scare, embarrass, and make fun of their victims. The harm that victims experience can occur on a number of different levels: Physical, social, emotional, psychological, etc. And the goal of bullies is to dominate, hurt, and destroy others.

So, in this way, bullies often obtain recognition and attention from the rest of their classmates and, at the same time, assume a relationship model that’s based on the exclusion and disregard of others.

Bullying is an extreme form of school violence, and it’s something that parents and educators need to work hard to prevent. With that in mind, didactic audiovisual media resources can be especially helpful. They allow children to visualize the consequences of bullying in a direct way. And, as a result, children gain empathy for those who suffer from this type of aggression.

“Education is the vaccine for violence”.

There’s a multitude of videos on the internet that deal with problematic issues like school bullying. Among them, we find the short animated film Rock, Paper, Scissors. As the title itself indicates, there are three main characters in this story: a rock, a pair of scissors, and a sheet of paper. Though it may seem like they have nothing in common, something brings them together…

All three of these characters are the victims of bullying. And so they decide to come together and help one another in order to stand up against their aggressors. So, using the power of friendship, camaraderie, and unity, they are able to overcome violence. In just one minute, this very short animated film manages to perfectly express the ability that children have to combat school bullying.

What’s more, by watching this film, students will also learn to:

For best results, children should watch this short film against bullying with the company of an adult. This can be a teacher, mother, father, coach, etc. Then, once the video is over, the adult should encourage and guide a conversation that will uncover the thoughts and options of the group on the subject.

It’s important to point out that this fantastic animated short film is part of an awareness campaign from Android. This  company, by means of this audiovisual production, has attempted to do their part in stopping bullying around the world.

That’s something we should truly value, given that school bullying would go down easily if we all did our part. There are a number of different things that adults can do:

Remember that bullying isn’t just a problem for schools – it’s something that affects and harms every part of society. Therefore, we need to pool our strengths and take a stand, taking into account the words of Japanese writer Ryūnosuke Akutagawa:

“Individually we are a drop, together we are an ocean.”

Levels of Bullying Intervention
Bullying is a serious problem. Those that are in contact with kids need to intervene. We'll tell you about the different levels of bullying intervention. Read more »
Link copied!
Interesting Articles
Responsibilities and values
5 Stories to Learn How to Save Money

Responsibilities and values
8 Ideas to Teach Children to Be Organized

While organization is important in adults' lives, it's even more important in children's lives. In fact, it's essential for proper…

Fostering empathy and friendship in the classroom is essential in order to achieve good relationships and strong bonds among students.…

Responsibilities and values
Mr. Indifferent: A Short Film About Helping Others

Mr. Indifferent is a marvelous short film – about three minutes longs – created and directed by Aryasb Feiz. In…