School bullying is a frequent problem in our society. Hence, we must understand certain aspects to be able to identify it correctly. Up next, we'll explain the keys to do it. 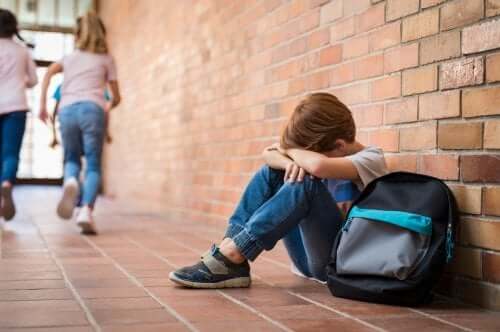 School bullying is a social problem that takes place in schools around the world. A large number of students suffer daily, being subjected to various acts of violence by their own classmates. Therefore, it’s important to know the keys to identifying school bullying.

We must pay attention and be alert to detect aggression in school. This can manifest in different ways, from physical violence to subtle behaviors, such as emotional and verbal abuse. However, regardless of the form of violence, all these acts of harassment leave a lasting mark on the victims.

What is school bullying?

We can define school bullying as:

The victimization or mistreatment among students through a physical or psychological persecution behavior that a student carries out against another; who is a victim of repeated attacks. This action, negative and intentional, places victims in a position from which they can hardly leave by their own means. The continuity of these relationships clearly causes negative effects on the victims; such as decreased self-esteem, states of anxiety, and even depressive symptoms. This makes it difficult for them to integrate into the school environment and the normal development of learning.

In this regard, you should note that there’s no single definition of the phenomenon of bullying, but the one we previously described is the most accepted. Despite this, there’s consensus among authors when it comes to affirming what the keys are in order to differentiate an episode of bullying from other violent behaviors.

In a bullying situation, there must always be attacks from one child to another. However, that’s not enough to identify school bullying.

There are also other indispensable factors that must exist, such as the intention on the part of the aggressor. That is, the harasser commits these acts with the intention of harming or hurting the other person.

“It’s not necessary to hit someone to cause pain. A word, silence, a disappointment, betrayal, indifference, these things also hurt.”

Another key to identifying school bullying is that the aggressive behavior must occur repeatedly and for a certain period of time. Hence, a single attack against a student isn’t classified as bullying, regardless of the damage caused to the child.

Additionally, the pain of the victim is also consistent since it assumes the phenomenon of learned helplessness. In other words, the victim continuously thinks that the aggressor will attack at any moment.

In bullying situations, the relationship between the victim and the aggressor is unequal. Bullies certainly use their condition of physical, social, or psychological power without the victims having the opportunity to defend themselves.

This imbalance in power transforms into a behavior pattern, where the bully subdues and dominates the victim. Often, bullies demonstrate the power they have thanks to the accomplices who support them in their actions. So they support their actions, either by adding to the abuse or by approving their behavior with their silence.

If the witnesses are passive and look the other way, they allow the aggressor to continue mistreating the victim. Nonetheless, if they stop ignoring the problem and position themselves next to the victim, they become defenders; rejecting the violence, reducing their power, and breaking the existing imbalance in the system of harassment and oppression.

The object of bullying is usually a single student. Bullies focus on harming a person, individually, making that person feel smaller and smaller. Thus, the aggressor makes sure the victim is in a helpless situation with no escape and completely alone.

Ultimately, bullying involves the existence of intentional violent behaviors, which a bully continuously performs, in a personalized way, towards a victim. Bullies take advantage of their power in front of their victims.

Children spend a large part of their lives in an educational center. As an advanced society, we can’t consent to students who can’t complete their academic, emotional, and social development in an integral way due to abuse.

Don’t let children have their innocence taken away and spoil their childhood. Act against bullying!

Being a Witness to School Bullying
Bullying is an increasingly occuring problem nowadays. And even if you're not the bully, being a witness to school bullying doesn't make you less guilty. Read more »
Link copied!
Interesting Articles
Social environment
The Benefits of Project-Based Learning

Social environment
The Benefits of the Maker Movement in Education

The phrases "do it yourself" or "do it with others" are what identify the maker movement. This social movement has…