How to Work on Word Intonation in Children

Word intonation can be a fun aspect to learn with your children. You can do it while you sing or read together. These are just some of the best ways to improve your children's intonation that we're going to suggest to you in this article. 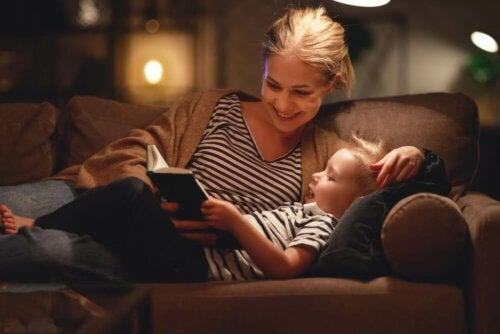 When we talk, we shouldn’t sound like robots – unless that’s our purpose, of course! Every word and every sentence has its own intonation, and some parts are emphasized more than others. However, when it comes to word intonation, speaking and reading are two very different areas.

That’s why we’re going to look at some keys to work on word intonation in children.

The basis of word intonation

You may not have noticed it until now, but even though there are people who speak with different accents, and even in different languages, we all follow certain intonation patterns.

These patterns can refer to the type of word or the type of phrase. Normally, we assimilate them unconsciously by imitation, but it’s very useful to know them in order to improve intonation.

Depending on the type of word

All words, no matter what syllables they have, have a tonic syllable that stands out from the others – it’s the syllable with most stress. If there’s only one syllable, then it’s obvious which one it is. However, if there’s more than one syllable, then words can be classified as acute (with the emphasis on the last syllable), flat (on the second to last) or proparoxytone (on the third to last).

Depending on the type of sentence

This part is even simpler, as there are only three types:

Which phrases will be the most expressive? Here the exclamation and question marks will guide the intonation, as they express emotion, doubt, surprise, etc.

How to improve word intonation

Improving word intonation is part of the process of mastering speech, so the more you talk, the better. If your kids show any signs of embarrassment while reading, then help them overcome it. It’s time for them to have fun while practicing their intonation!

For the little ones in the house this is obviously the most fun option of all. Not only will they improve their intonation, but they’ll also improve another very important aspect: pronunciation. Both aspects go hand in hand, as improving pronunciation usually results in improved intonation.

The best thing about using songs is that, because they’re catchy, children repeat them over and over again until they’re able to sing them well. This is because they really want to imitate the song well and sing it like the person who sings it. In addition to this, they’ll also learn new vocabulary and expressions, and develop their creative side.

Reading and intonation of words

We’re not talking about reading to oneself here, which also has great benefits, but of reading out loud. At first glance there may not seem to be too much difference in the benefits, but there is. When children read aloud, then they’re forced to look at the punctuation marks and manage their air intake well as they read and try to carry out the correct word intonation.

At first, we can distinguish two types of readers: those who read fairly slowly and emphasize intonation a lot, and those who read very quickly and tend to pass over certain words or confuse them easily. These words tend to be of a more linear intonation.

Little by little, as they read out loud, children can eradicate these errors from their reading. And, if they read to someone else, even better. That person will be able to help them and correct them when necessary.

Now comes the big question: how do you get a child interested enough in reading to improve these aspects? Well, it doesn’t have to be a very long reading, as long as it’s a topic that interests them. In this way, they’ll get involved in the reading activities themselves, because it’ll be something they’ll enjoy.

The intonation of words in drama

Doing drama work is taking reading aloud one step further. In drama or acting activities, children are taught to play a role and express themselves through the intonation of a text.

In addition to this, acting will also help children to express themselves through their own bodies and to convey feelings with the words, which isn’t always an easy task. This cognitive and emotional development makes children feel more confident when they communicate, interact with other children, and express their own ideas.

The Importance of Reading Comprehension
Reading isn't learned naturally. The development of this ability is acquired little by little, and reading comprehension is the last aspect developed. Read more »
Link copied!
Interesting Articles
Spelling and Literacy
How to Help a Child with a Learning Disability Comprehend Reading

Spelling and Literacy
Discover 12 Benefits of the Use of Dictation

Spelling and Literacy
Learning to Learn: A Basic Skill in Education

Currently, the main objective of the educational system is to make students acquire the necessary skills for personal and integral…

Spelling and Literacy
What Should the 21st Century Schools Century Look Like?

The classic image: A teacher using the blackboard to give a lecture-type class in front of a group of children…