Should You Stay Together for the Sake of Your Children?

Your children shouldn't be the excuse to remain in an unhappy marriage. A home with tension and unhappiness causes more harm than a separation. 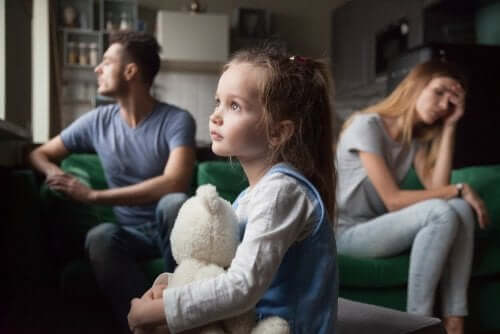 Personal relationships are a complicated matter that don’t always turn out as we had hoped. When a relationship isn’t working anymore and both parties are thinking about separating, you often hear the phrase: “I won’t get divorced because of my children.” However, have you ever thought about the damage that this can do to your little ones? Should you really stay together for the sake of your children?

The decision to end a marriage shouldn’t be taken lightly. After the disappointments and numerous attempts to keep going or start over, those involved often conclude that there’s no point in continuing with the relationship. However, separation and divorce are always hard and unpleasant situations to go through.

In this situation, many parents, almost subconsciously, use their children as an excuse for not having to face the ​​personal failure that a divorce would mean for them.

Not all parents think about it a great deal and take into account the children’s welfare. However, they may actually be achieving the opposite effect to what they were aiming for.

How will it affect my children if we stay together?

For children, their parents are their main point of reference. They’ll learn how to behave correctly and how to interpret the world thanks to them. Childhood is like the playground where we play out the first years of our lives. What we assimilate during those first few years will help to define our concept of family, love, coexistence, affection and conflict resolution.

For little ones to live in a home where there is conflict, or simply just indifference, is very detrimental to the formation of their mind.

Some couples remain together despite having concluded that they aren’t happy in their relationship. Because of that, their coexistence (and that’s all it is) is plagued by conflict, arguments, shouting and insults.

Although they try not to argue in front of the children, in the end the children always know what’s going on and will witness it to a greater or lesser extent.

The children feel unprotected, and this generates a constant feeling of stress inside them. The whole situation creates anger and fear, but they can’t turn to their parents for advice and comfort. Why? Quite simply because their parents are out of control, and aren’t thinking rationally. They’re the main players in the very situation that is disturbing the child.

The children will often try to remedy the situation by not telling their parents about their own problems. They do it to try to avoid new conflicts. Or, alternatively, they may try to seek attention with bad behavior so that their parents will focus on them.

The children will often just end up assuming that shouting and insults are valid interaction strategies. They’ll think that reaching agreements in a respectful way is just impossible.

They’ll understand that life is all about suffering, and relationships are a constant battle. Because of that, when they’re adults it may be very difficult for them to form healthy, loving relationships.

Troubled homes are one thing, and indifferent homes are another. These are homes where the parents completely ignore each other and lead separate lives. You may think that this wouldn’t be as harmful for the child, but you’d be wrong.

Parents may think that if they don’t argue, then their children won’t suffer. However, all they’re doing is keeping their children immersed in an awkward environment which is totally devoid of love and affection on the part of their parents.

Despite living with their two parents, these children don’t experience true family life. No plans are made to do things together. Quite often they watch how their parents sleep in separate rooms and barely say a word to each other. They see sadness and defeat etched on their faces, as they treat each other like complete strangers.

The children will be full of sadness and guilt in this sort of situation. They’ll try to create family moments, and will be frustrated when they fail, or when it creates tension. They’ll feel the burden of trying to make their parents happy, since the parents themselves don’t make any effort in that respect.

All they’ll learn is that it’s acceptable to treat your partner with indifference and a lack of love. They’ll understand that you just have to endure situations like this; there’s no option to seek your own happiness. In addition, they’ll have no point of reference about what living together is all about, and this might make them very lonely in the future.

Knowing when it’s better to separate

When you’ve tried everything to save the relationship but without success, then it’s preferable to separate and take different paths. This, of course, must all be done with respect and in the correct way. No one can give their children what they don’t have; we can’t teach them about courage, love, and happiness if we don’t have them ourselves.

A separation will be hard and frustrating for everyone. However, in the midst of all the pain, we can try to help our child to understand that sometimes we have to make difficult decisions and take a different direction in our lives.

When it all comes down to it, we have to look out for our own well-being, and the well-being of our children in the long term.

Talking About Divorce with Children
Talking about divorce with children is difficult and how they react manifests differently depending on their age, maturity, and personality. Read more »
Link copied!
Interesting Articles
Separation and Divorce
Family Relationships After a Separation