Bullying is one of the most difficult topics to talk about with children, which is why children's literature is a good tool for this subject. 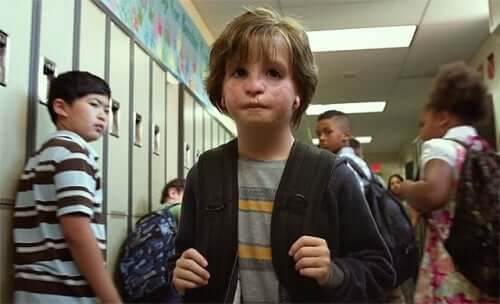 Teachers and parents should discuss bullying with children from an early age. The dialogue will flow a lot easier if you rely on children’s books about bullying.

Unfortunately, bullying is one of the topics that most appear in the media nowadays. Education is one of the foundations for instilling values in children.

These values and the personal development that will manifest in their growth will make them see that bullying is a terrible action that must be eradicated from every classroom. Equality, non-violence, and respect for all are the foundations to eradicating, preventing, or even detecting bullying.

Bullying can occur at any stage. This book is recommended for children age 12 and up.

August is the protagonist of this book, one of the best children’s books about bullying. © Lions Gate Entertainment, Mandeville Films, Participant Media

August, the protagonist of this story, is a child who was born with a serious illness and facial disfiguration. After several years of being homeschooled by his mother, his parents decide it’s time for him to start going to school.

This book shows the feelings, actions, and motives of the different characters. This is because several parts of the book are told from the point of view of several of them.

So consequently, this is a good book to discuss bullying with children who are old enough to fully understand what it means and its repercussions.

Recommended for children ages three and up, it’s one of the best children’s books about bullying. This is because the story, instead of showing the same things other books do, focuses on the bully.

This way, you can learn a little more about the reasons that lead children to behave this way. The book deals with the topic of empathy and seeing both sides of the same coin.

In addition, it’s an essential tool to show in classrooms, where those bullied and the bullies have to coexist, as it helps make both groups understand how to act in each case. Likewise, it also makes them reflect.

3. El Club de los Valientes (In English: The Club of the Brave) by Bogoña Ibarrola

One of the lessons that you should teach your children regarding bullying is that they must resolve conflicts peacefully and without violence.

This is what this book talks about, which you can tell immediately when you look at the cover that shows a dove. The values this book wants to instill in children is nonviolence, self-control, and courage, as these three aspects are the foundations and the best ways to fight bullying.

Racial discrimination is another form of school bullying that’s very common nowadays. This is the kind of bullying that Cream and Chocolate deals with, as the protagonist is an albino girl who’s being bullied.

The book is essential, as it deals with a series of very important values during childhood and adolescence, such as friendship, empathy, tolerance, and solidarity. A book with a sensitive and emotional story that was so successful that the author decided to write a sequel.

One of the greatest issues when it comes to being bullied is having the courage to tell someone what’s happening or not. In the vast majority of cases, due to fear, many children choose not to tell another person what’s happening to them. However, not telling can lead to even more serious problems.

Each page of the book is divided into two parts and, depending on the path you choose, there will be a different ending to the story. On one side, the child decides to tell someone what’s happening. On the other, the child decides not to tell anyone and the story shows the consequences of that decision.

This fantastic story helps children become aware of the situation. In addition, it also allows them to interact with the book.

This book addresses one of the most common aspects of bullying: the silence of the other children who are around due to fear of being bullied themselves.

This is also a good topic, since few talk about the people who are around the bullied and the bully. Through its pages, you’ll discover their fears, all the thoughts that go through their minds, and the internal struggle between doing what’s right or protecting themselves.

The Role of Families in Putting a Stop to Bullying
Bullying is a social problem and it's our duty to try to put a stop to it. Below, you'll learn about the role families play in putting a stop to bullying. Read more »
Link copied!
Interesting Articles
Children's stories
Children's Books About Christmas Magic