8 Names from Literature for Girls

Literature leaves a major impact on its readers. So much so, in fact, that many decide to name their children after their favorite literary characters. Today we'll suggest 8 names from literature for girls. 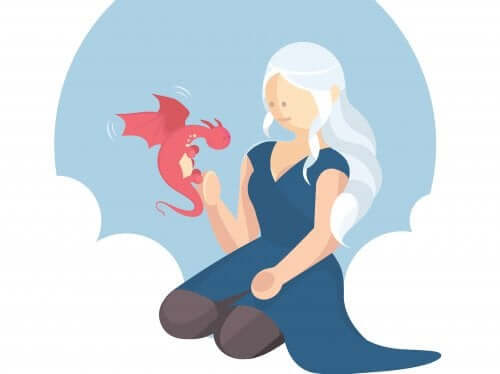 Choosing a name when you’re expecting a new baby isn’t always easy. A passion for reading leads many families to turn to literature for inspiration. As a result, they choose to call their little one by the name of their favorite literary character. If you’re in the process of choosing a name, today we want to suggest 8 names from literature for girls that you may find inspiring.

There are all kinds of common girl’s names that are popular at the moment. But more and more parents are looking for something original and unique. In the following article, we’ll offer you a series of names for girls inspired by literature that will help you choose a name for your future daughter.

Names from literature for girls

1. Helen, from Helen of Troy

Without a doubt, Helen of Troy is one of the most well-known literary characters, despite the passing of time. Helen is the main character of the epic Greek novel The Iliad, written by Homer and known worldwide.

Helen represents ancient Greece and the feminine ideals of that time period. Without a doubt, this is one of the most popular names from literature for girls.

2. Alice, from Alice in Wonderland

Alice is another one of our favorite names from literature for your future daughter. This name was especially popular in Germany and France in the 12th century. In old French, the name was Aalis, which was a shortened version of the Germanic name Adalheidis. The name also traces back to the Greek word “alethéia,” which means “truth.”

Of course, today we tend to associate this name with the classic book Alice in Wonderland by Lewis Carrol. And, of course, with the Disney movie based on Carrol’s story.

We all associate the protagonist of Alice in Wonderland with a great imagination and fantastic dreams. Therefore, if you want to honor these qualities in your future daughter, don’t hesitate to name her Alice.

3. Isabel, in honor of Isabel Allende

If you’re looking at names from literature, there’s no reason to limit yourself just to the characters… You can also look for inspiration in the names of authors. For example, we love the name Isabel, in honor of the world-famous Chilean author Isabel Allende.

Isabel Allende is the most well-known living author in the Spanish-speaking world. She has received a number of prizes and recognitions over the course of her long career.

The name Isabel means “health and beauty” and is a beautiful and sweet-sounding name.

4. Juliet, one of the most famous names from literature, thanks to Romeo and Juliet

This romantic tragedy was written by William Shakespeare all the way back in the year 1595. But despite being over 400 years old, and despite its tragic ending, it’s still one of the most popular love stories today.

The female protagonist in this story is known for fighting for what she wants, making her a romantic being. In this sense, the name Juliet is associated with having a strong personality and being sensitive.

More names from literature for girls

5. Anne, from The Diary of Anne Frank

Another popular name that has to do with literature is Anne, in honor of the author and protagonist of The Diary of Anne Frank. Anne, a Jew, wrote in her diary while hiding from the Nazis in Holland during World War II. Her writing is a testimony to the human spirit and also reminds us of the tragedy and horror of the holocaust.

“I keep my ideals, because in spite of everything I still believe that people are really good at heart.”

During the 19th century, Emma was a name that arrived and came to stay. In fact, today the name is still quite popular. There are two classic pieces of literature that feature characters by this name. The first is Madame Bovary, by Gustave Flaubert, and the other is Emma, by Jane Austen. Both became best-sellers around the world.

Names from literature for girls

The Hunger Games is a science fiction and adventure trilogy that’s perfect for adolescent readers. Since the release of the first book in 2008, the series has been a huge success – not only on paper but also on the big screen.

The strength, tenacity, and courage that Katniss – the heroine of these books – have gained her the admiration of fans around the world. In the United States, in fact, many families have chosen to name their girls after this iconic figure.

Daenerys Targaryen is one of the main characters of one of the most successful sagas in history, A Song of Ice and Fire, by George R. R. Martin. These are the same novels that inspired the sensational television series Game of Thrones, which finished its last season in 2019.

There’s no question that the name Daenerys will be among the most popular names in the years to come. The popularity surrounding this story and Daenerys, in particular, is absolutely amazing.

Compound Names for Girls: Classic and Modern
Choosing compound names for girls is often done because it's so hard to decide on a single name when there are so many beautiful ones out there. Read more »
Link copied!
Interesting Articles
Children's stories
Children's Books About Christmas Magic