7 Stories About Christmas for Children

The Christmas season is full of gifts and lots of free time for the children in your home. It's also a great time to read stories with important messages. With that in mind, we want to suggest 7 stories about Christmas that you can share with your little ones. 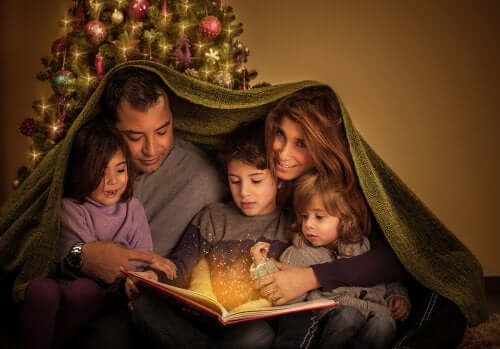 Christmas is a time of gifts, candies, delicous meals, and time off of school for children. But there’s no reason they need to stop learning over their holiday vacation! In fact, there’s a long list of stories about Christmas that you can share with your little ones.

With the help of these stories, you can continue to promote friendship, sharing and family love. In addition, little ones will find something useful to do with their time and practice reading, if they’re old enough. For all these reasons, here are some proposals to consider.

Stories about Christmas for children

This story will teach children to value Christmas for its potential to bring us closer to our loved ones. Charles Dickens created the story of Ebenezer Scrooge, a businessman who hates the Christmas celebration.

After a visit from three ghosts of Christmas, Ebenezer learns the value of family gatherings around the holidays.

This Swiss tale is quite witty and combines St. Nicholas, a fearsome monster, and a kind girl. The old man in red gets a note from a little Swiss girl who doesn’t want any toys. Her only request is that her brother stop bothering her.

In response to this request, Santa searches for a monster named Krampus to visit the pesky brother and scare him off during the night. To make matters worse, all the little boy gets for Christmas is a lump of coal… Lesson learned!

The story of Rudolph the red-nosed reindeer

As you all know, Rudolph the red-nosed reindeer is one of the reindeer that helps Santa Claus deliver gifts around the world. His huge, bright red nose is a source of ridicule and disgust to the rest of his brothers. As a result, he feels very ashamed and alone.

When Santa Claus decides to deliver the presents on Christmas Eve, he can’t see the way because of all the snow. But then, Rudolph comes to the rescue, guiding Santa and his sleigh with the light of his bright red nose. So, we can say that this story is one of acceptance and tolerance.

How the Grinch stole Christmas!

The best thing about this children’s classic is that the Grinch, in the end, can’t steal the Christmas spirit. It all happens when this envious and unhappy character wants to ruin the celebration of the loving and happy people of Whoville.

In the midst of preparations, the Grinch steals all the presents before Christmas arrives. However, to his surprise, the people of Whoville remain joyful and full of the holiday spirit. That’s when this character softens up and returns everything.

The Grinch is a character that is already part of our collective consciousness, representing the “anti-Christmas.” Without a doubt, this is one of the funnest and most effective stories about Christmas for children. You can even watch the film!

The Selfish Giant, by Oscar Wilde, one of the best stories about Christmas for children

Published in 1888, The Selfish Giant tells the story of a giant who had a beautiful garden which he refuses to share. One day, he catches some children playing in his garden and throws them out, but the space withers away, losing its beauty.


Noticing this, the giant allowed a child to play in his garden, but after that he didn’t see him again. After a long wait, the child appears and tells the giant that now he can go to his own paradise. It turns out that this child is none other than Jesus Christ.

The story of the birth of the baby Jesus

If we’re talking about stories about Christmas, then perhaps the most important one to mention is that of the birth of baby Jesus. You can use the Bibble as a reference, but all parents know it as a central part of our civilization.

Basically, this story focuses on the sacrifices of Mary and Joseph to protect the birth of their little one. Despite being the son of God, Jesus was born in a humble manger. The importance of the star of Bethlehem is remarkable.

The Story of the Three Wisemen

The last of our stories about Christmas is inspired by the Biblical Christmas account and tells of the efforts made by the three wise men to get to where Jesus was. All to give their offerings to the chosen one who would change the destiny of the world. There are writings that are based only on the journey of these three characters.

Although they may seem difficult to obtain, there are other Christmas stories, both traditional and modern. Almost every country has its own legends, myths and writings, so it’s worth doing a bit of research.

6 Christmas Activities to Enjoy with Your Family
Plan special Christmas activities ahead of time so that your family can enjoy the holiday season and winter vacation to the max. Read more »
Link copied!
Interesting Articles
Children's stories
Children's Books About Christmas Magic