One of the best options to spend the holidays at home is to see a good family movie. There are many Christmas movies for children. In this article, discover some of the best-known ones. 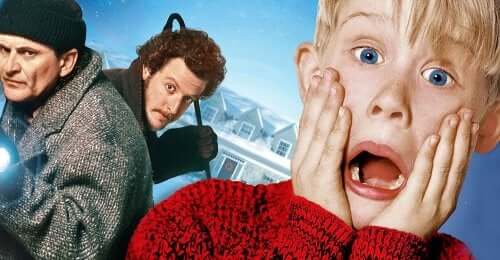 The last month of the year is synonymous with family time, parties and celebrations, but also with time off, gifts, and entertainment. Movies are one of the things both adults and children enjoy the most. Therefore, when December arrives, you should enjoy a cup of hot chocolate and marshmallows at home with these 10 Christmas movies for children.

Best of all, you can enjoy them year round!

The third adaptation of the story written by Dr. Seuss came in Real 3D animated format. This is a much less dark film than the previous version which starred Jim Carrey, which also makes it friendlier for children audiences.

The Nightmare Before Christmas (1993)

This film is also related to the story How the Grinch Stole Christmas! (1957). This time, the protagonist is Jack Skellington, the Pumpkin King, a central figure in the celebration of Halloween. Animated using the stop motion technique, its Gothic aesthetic, very typical of its creator, Tim Burton, can impress small children.

Rudolph the Red-Nosed Reindeer: The Movie (1998)

This is one of the Christmas movies for the smallest children. It tells the story of a reindeer that, thanks to its bright red nose, stands out from the rest. However, his peers bully him. After fleeing, he returns to become the hero who saves Christmas.

Home Alone (1990), one of the best Christmas movies for children

A kind of modern Christmas classic starring Macaulay Culkin and veterans Joe Pesci, Daniel Stern, and Catherine O’Hara. It was so successful that it led to four additional sequels. It tells the story of a child who must defend his home against a pair of thieves on Christmas Eve.

This computer-animated adventure film was directed by Robert Zemeckis (Back to the Future, Forrest Gump). It tells the adventures of an eight-year-old who isn’t sure if he should celebrate Christmas or believe in Santa Claus.

But the child’s faith is restored after traveling on a train to the North Pole, captained by Tom Hanks. This epic adventure takes place on Christmas Eve.

A Christmas Carol (2009), another amazing Christmas movie for children

A Christmas Carol, by Charles Dickens, is a story that reflects on the Christmas spirit. It’s also directed by Robert Zemeckis and stars Jim Carrey as the famous Ebenezer Scrooge.

This is another adaptation of the Dickens classic, but starring the Muppets. Unlike Zemeckis’ version, this movie was created especially for younger children.

Before Jon Favreau created the Marvel Cinematic Universe with Iron Man, he directed this original holiday comedy full of magic and fun.

It tells the story of a man who accidentally becomes one of Santa’s elves. But when he discovers his origins, he decides to embark on an adventure to try to find his real parents.

Although it was considered a flop when it premiered, it gradually earned its place among the best Christmas movies for children.

In this story, the North Pole has been modernized to the point that it works like Amazon. Since everything is under control, Santa decides to retire. But the first year after his retirement, a child is left without a gift.

This superhero movie premiered before this film genre became the king of Hollywood. It was directed by Tim Burton, who exploited the same dark and gothic aesthetic that characterized The Nightmare Before Christmas. The Dark Knight must face Catwoman and the Penguin right in the middle of Christmas. Recommended for children ages 12 and up.

These 10 options aren’t the only ones that exist. Slightly older children, between the ages of 10 and 12, can choose Jingle All the Way (starring Arnold Schwarzenegger).

Finally, those who are about to enter adolescence can enjoy Gremlins, Edward Scissorhands (another Tim Burton classic), or Bad Santa.

7 Wonderful Christmas Movies for the Whole Family to Enjoy
Keep this list of excellent Christmas movies on hand to keep your family entertained and connected during this holiday season. Read more »
Link copied!
Interesting Articles
Plans with family
5 Crafts to Celebrate the Arrival of Spring

Plans with family
Traditional Games to Enjoy During the Summer

Summer is the season of the year where children enjoy the outdoors a lot more. However, we’re increasingly seeing children…