It's time to give a second life to the plastic bottles we have at home: let's enjoy these crafts. 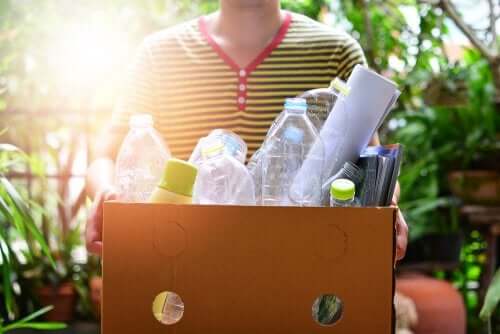 When kids are on vacation, such as winter break or during the summer, they have many free hours every day. One of the activities that can entertain them, in addition to developing their creativity and imagination, is making crafts with plastic bottles.

As always, we’ll try to present you with craft ideas that require simple materials that you would normally have at home. For this activity, the base material that we’ll start with are plastic bottles.

Nowadays, it’s important to teach children to use plastic material as little as possible. That’s why giving these plastic bottles a second life by reusing them to make different objects is a good idea.

It’s also important to be with your children at all times while making these crafts. It will be necessary to cut the bottles and this is an action that the little ones shouldn’t do.

Children love animals. For this reason, animals will be one of the crafts with plastic bottles that they’ll like the most. Moreover, they’ll have the possibility of creating different animals from a single object. For this, you’ll need:

If you have several water bottles, you can take this opportunity to create different animals, such as a pig, a zebra, or a cow. There are hundreds of possibilities; you just need your imagination.

Children will like nothing more than creating their own piggy bank to save the money they get. On this occasion, you’ll have two possibilities: to store bills only or coins as well.

If you opt for the first option, it won’t be necessary to cut the bottle since you can use its mouth to stick in the bills. On the other hand, if you also want to store coins, you’ll need to make a cut on the front of the bottle to be able to insert them.

To decorate it, you’ll also have two options: covering it with paper or painting it.

To infinity and beyond with a rocket!

If the crafts you do together can later serve your children as toys, doing them will be even more fun. Thus, they’ll probably like to make their own space rocket. To do this, you’ll need the following materials:

The first step is to paint the plastic bottle the color that you wish. After that, you can paste all the stickers you want to add more character to the rocket. The next step will be to create the wings of the rocket and the front part. To do this, you’ll use the cardboard:

The frog game, one of the crafts with plastic bottles that you’ll like the most

Some games just never go out of style, despite the passing of time. They’re called traditional games – one of these games is precisely the one we’ll build with a plastic bottle.

More specifically, we’re talking about the frog game. Do you remember that frog with its mouth open that we played with by throwing chips in its mouth? Well, that same frog is what we’ll create with the following materials:

The first step will be to create the frog’s mouth. To do this, we’ll make a hole in the front of the bottle, about halfway. It has to be large enough to be able to insert the chips in correctly. Once you complete the slit, we’ll use the colored sheets to create the eyes, the corner of the mouth, and the frog’s hands. Now we’ll be ready to enjoy the game!