Benefits of Children Talking to Themselves While Playing

Many children talk to themselves while playing. This has many benefits for their cognitive and social development. Here are some of the benefits of them speaking to themselves. 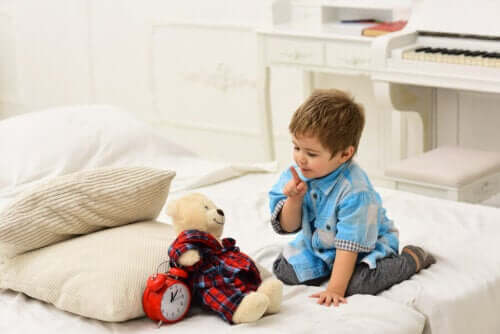 Up to what age is children talking to themselves normal?

Children talking to themselves is a very common habit, especially up to the age of 5, which is when they generally start doing activities like other people. As with everything else, it all depends on the maturity of your child. There are some children who speak to themselves until adolescence and others stop speaking to themselves much earlier.

In any case, no matter their age, children talking to themselves isn’t a problem. In fact, it’s very beneficial for social and cognitive development in childhood.

Benefits of children talking to themselves

As they play, children will try out new ways of communicating. They might practice saying something from a different perspective. In addition, they’ll be attentive to everything said around them and incorporate it into their vocabulary. Then, they apply it when playing with their favorite toys.

They listen to themselves

Another advantage is that by speaking to themselves, children listen to themselves and become aware of what they’re saying. This is very important to their understanding. The more they practice, the more capable of oral expression they’ll be in the future.

They develop their creativity

While playing, a child invents situations, characters, problems, and solutions. All this is so that the game makes sense. They’ll invent scenarios and unleash their imagination to enjoy their game.

Developing empathy, another advantage of children talking to themselves

More advantages of children talking to themselves

Through play, children organize their speech. They’re in no rush to respond, which gives them more time to decide how to form their sentences.

When imitating various characters, your child needs to speak in turns so that the characters aren’t interrupted. This helps your little one understand taking turns to speak.

While playing on their own, children need their characters to agree on certain things. This can lead your child to figure out solutions to any problems that arise.

Development of their social skills

Representing different characters helps children to implement different forms of interaction with people. As a result, this helps the development of their social skills, which will be very useful in the future.

Increases self-control, another advantage of children talking to themselves

When children speak to a third person when playing, it helps them to distance themselves from the situation, which can help release tension. With this, they’re also able to better regulate their negative emotions. As they play, they may be able to express their concerns or fears more easily and to control their anger.

When playing alone, there’s no one to tell your child if they’re doing something right or wrong. This means that they correct themselves because they need their characters to understand each other better.

Advantages of children talking to themselves while playing

There are many benefits to children talking to themselves while playing. Therefore, when you hear them, don’t cut in or interrupt. Sometimes, if they notice you watching, they’ll stop talking or feel ashamed of playing different characters.

As you can see, it’s important that they play this type of game for the cognitive and social benefits.

When Do Children Begin Talking?
When do children begin talking? If you are a mom with a young baby, maybe this is something you ask yourself when you hear your baby making noises. Read more »
Link copied!
Interesting Articles
Children's stories
Manolito Four-Eyes: A Fun Book Collection for Kids