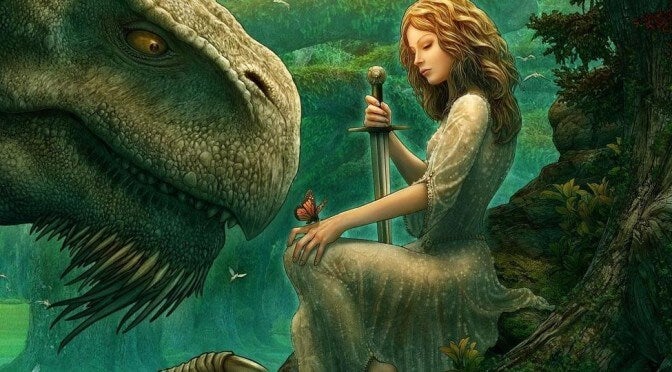 A fairytale can be a useful way to teach children how to handle their emotions. Many stories can offer important life lessons about facing challenges and overcoming difficulties.

Storytelling is a great way to help children learn how to manage their feelings in a healthy, assertive and mature way.

In this article, we’ve chosen a wonderful fairytale of friendship and bravery.

The princess and the emerald dragon: a fairytale with a moral

There was once a princess who lived in a far-away fairytale kingdom. Her parents, who loved her very much, owned an enormous castle surrounded by forests and mountains.

There were animals of all kinds, from little mice to huge elephants, and all of them lived happily together, respecting one another.

The princess’s best friend was a young lion. They played together every day. They also liked to tell each other stories, even scary ones.

The scariest tales of all were those that told the legend of the Emerald Dragon. This ferocious dragon loved nothing better than to terrify people and animals.

The legend of the emerald dragon

When the princess heard about the dragon, she grew angry at her friend. She shouted at him for telling her such a terrifying tale, which would surely keep her awake all night.

The playful lion found this all rather funny. One night, however, the princess got very angry and threw a stone at the lion. It hurt, and the lion began to cry.

They both went home, and the princess was sad. She didn’t want to tell her parents about what had she had done. If they knew, they were sure to be mad!

The next day, the princess went to look for her friend. She wanted to say sorry. But she couldn’t find the lion.

Everyone took up the search for the little lion, but he was nowhere to be found. For 3 days and 3 nights, there was no sign of him.

Finally, one of the little mice heard a terrible rumor. The lion had been caught by the emerald dragon, and was being held captive in its lair.

The princess was scared and confused. She wanted to help the lion, but she was terribly afraid.

“There is nothing we can do,” said her other friends. Her parents still didn’t know what she had done, and this made her feel even worse.

One night, the princess mustered her courage, took a sword and went off in search of the dragon. She found it hidden in a cave, in the deepest, darkest part of the forest.

When she saw the beast, she almost turned back. It was even bigger and more terrible that the lion had said. But then she remembered that she needed to be brave.

So, trembling, she approached the monstrous reptile.

The princess confronts the dragon in its cave

“Release my friend, or I will slay you with my sword, evil dragon!” shouted the princess. But to her surprise, the dragon answered her challenge with a look of confusion.

“I did not capture your friend,” said the dragon. “He was hurt and lost in the forest, so I took care of him.”

She felt a little guilty for having thought badly of the dragon without even having met it.

“I thought that, because you were a dragon, you would be cruel,” said the princess. The dragon explained that appearances could be misleading.

The important thing is not what’s on the outside, but what’s in our heart. The child realized that she had been afraid of the dragon just because it was huge and had long, sharp fangs.

In most legends, the monster was always bad, but what people didn’t know was that this dragon was good on the inside.

The dragon lived in the forest because nobody wanted to be around a beast so huge and fearsome. The lion had decided to stay with him, and now they were friends.

When the princess saw that the lion was safe and sound, she ran to ask him for forgiveness.

The princess, the lion and the dragon

“Please forgive me. I know that I was wrong to get so angry, and I should never have hurt you. I won’t do it ever again!” said the princess, hugging her friend.

“I forgive you,” said the lion. “You have been very brave, and that has shown me how much you care,” he added.

The little lion began to gather his belongings. As they were about to leave, the lion asked the princess whether the emerald dragon could come with them.

The dragon was so good and kind, and deserved to have friends and be happy. The princess agreed, and the three walked back to the castle together.

When the king and queen saw the dragon, they were afraid. But the princess quickly told them everything, and they agreed to let her keep the dragon as a pet.

Once the princess had told them the whole story, she felt like a great weight had been lifted from her shoulders. She realized that everything would have been much easier if she had told her parents the truth from the start.

In the end, the dragon became a friend to all the people and animals. All of them had learned valuable lessons.

We must be brave in facing our problems, and we must never judge others on their appearance alone.

Anger can only cause problems, and when we share our feelings, we soon feel better.