When a Grandmother Sees Her Grandchild for the First Time 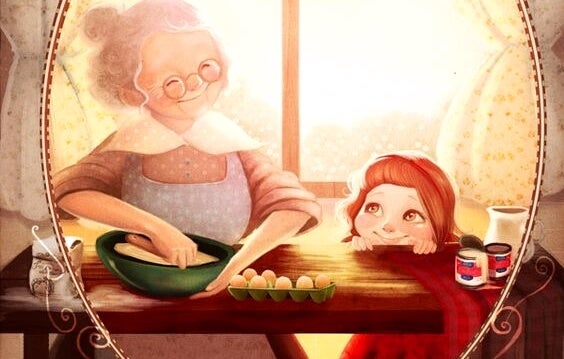 When a grandmother sees her grandchild for the first time, she flourishes as a person. She develops as a human being and her emotions become intensified until reaching an indescribable level.

It doesn’t matter whether it is the first or the eighth grandchild. They are all as precious as the jewels of a beautiful necklace. They are like treasures of a new generation that need to be pampered with love.

Today in YouAreMom we would like to pay a small tribute to these special women. These 2.0 grandmas are already being described as a new generation of “superwomen.”

Many of them are far removed from the classic image of a grandmother who only bakes cookies and picks up her grandchildren from school. This is something new, modern and interesting.

Nowadays, there are many new terms to describe these new and fantastic grandmothers. For example, “Glam-mas” (glamorous grandmother).

This was part of an idea that arose in the United States following an article in “The New York Times,” where the authors explain how grandmothers’ role has changed a lot in recent years.

In this article we will give you all the related information.

There is something that a lot of people experience when, all of a sudden, their first grandchild arrives. It is the realization that they have just entered the autumn of their lives.

Am I as old as they say? Does the simple fact that my children have their own mean that I am an “old woman”? Absolutely not.

Enthusiasm… and a touch of concern

When a 55 or 65-year-old woman sees that fragile, tiny and precious creature that forms part of their legacy and turns them into grandmothers, the first thing they feel is joy.

Since the moment I saw you, I only want one thing: To be part of your heart

In an interesting article published by Psychology Today titled “Learning to be a grandmother,” some thought-provoking ideas are explained. The first is that the mother-daughter relationship improves once a mother becomes a grandmother.

All of a sudden, they assume the role of “friend-mentor” and this turns out to be beneficial for both parties.

“The most perfect love, sometimes doesn’t arrive until the first grandchild”— Chinese proverb

The second thought the article shares is that, socially; we need to reinterpret the roles of grandparents. In many families during a time of crisis, grandparents are the ones who provide financial and emotional support. Therefore, they need more institutional recognition.

Learning to be a grandmother implies, above all, unlocking an exceptional potential of self-realization and personal growth. We need society to be more attentive and sensitive with our elders, as they are an incredibly active and important generation in our day-to-day life.

The greatest aspiration of a grandmother is to win the hearts of her grandchildren. They want to live forever in a very special place in the child’s heart, and long to share as much time with them as possible.

They also understand that their share of life is more limited than that of their grandchildren.

One of their tasks as grandparents is to transmit education based on emotion, recognition and a strong bond that should always accompany their grandchild who will soon be an adult.

Their grandmother will stand out as being one of their greatest role models. The person who inspires, cultivates imagination, and gives good advice. The one who allows them to grow without punishments. The one who provides a daily embrace, a hand that caresses. The one with whom they share secret smiles after receiving hidden gifts.

2.0 grandmothers don’t represent the classic grandparent image. They are still as tender and affectionate as they have always been.

However, they possess the maturity, independence and character of a new generation. And that is incredibly positive for our little ones.