Edema in Pregnancy: How to Relieve It

Edema in pregnancy is a common problem caused by fluid retention. What steps can be taken to lessen its consequences? 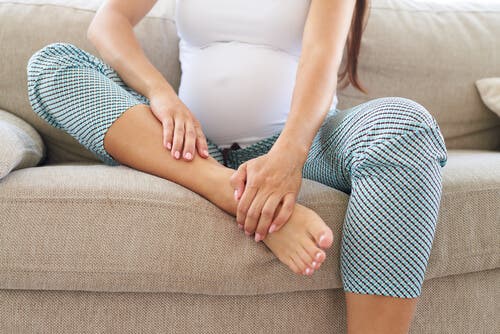 During pregnancy it’s quite common for legs and feet to swell. This is especially the case in the warmer months, when standing for long periods of time, or at the end of the day. This accumulation of fluid is called edema and, although it’s very uncomfortable, it isn’t usually regarded as a serious pathology or disease. Find out how to relieve edema in pregnancy in this article.

The accumulation of fluid can make our feet and legs increase noticeably in size. Sometimes it also occurs in the upper limbs, that is, the hands and arms.

Another possible consequence is a tingling sensation, discomfort, or even pain. In addition, in times of increased retention, a pregnant woman can increase her shoe size by up to two sizes.

Undoubtedly, this is a situation that produces discomfort and one that any future mother would like to be able to avoid. In the following article, we’ll give you some timely advice to alleviate some of this discomfort.

Edema in pregnancy: what to do when your legs swell?

As the abdomen grows in size and weight, it presses on the blood vessels (especially the vena cava) that circulate the blood from the legs to the heart. In this way, pregnant women are more susceptible to suffering from edema the further along they are in the gestation process.

Generally, edemas appear in the third trimester of pregnancy. However, they may also occur earlier if there is poor blood circulation.

As we mentioned previously, having edema in pregnancy is usually a consequence of the anatomophysiological changes that the body undergoes during these months.

However, in a low percentage of pregnancies, a condition called lymphedema may occur. This consists of a retention of lymphatic fluid, generally caused by a congenital abnormality in the woman’s body. It has also been linked to hormonal causes.

Although it’s also an accumulation of fluid, it’s distinguished by the fact that it commonly affects only one part of the body. In these cases there is often a noticeable difference in size between the legs and arms, for example.

How can we relieve this condition?

Beyond the fact that this is a process that occurs very frequently, it’s possible to take certain precautions so that the day-to-day life of the pregnant woman is less affected by these problems. Below, we’re going to offer some alternatives to combat edema in pregnancy:

Is lymphatic drainage a good option?

Going to a specialized center for lymphatic drainage is also a safe alternative to soothe the discomfort caused by swollen legs. You don’t need to worry at all, because it’s a procedure that’s harmless to both mother and baby.

Basically, it consists of a series of manipulations and massages in the lymphatic system to encourage the reabsorption of the fluid that has accumulated outside the veins. After lymphatic drainage, the woman will feel relaxed and extremely relieved; she’ll feel a lighter sensation in her legs after the session.

Finally, we should point out that, if the edema in pregnancy doesn’t subside, or if it worries you or causes you considerable pain, then it’s best to consult your gynecologist, doctor, or midwife. In this way, they’ll be able to assess whether any further measures are needed, and you’ll feel much more relaxed about you and your baby’s well-being.

The Benefits of Sex During Pregnancy
The question of whether or not to have sex during pregnancy is a topic many women are concerned about. Find out about the benefits of sex during pregnancy. Read more »
Link copied!
Interesting Articles
Stages of labor and birth
Labor Pain Management: What You Should Know