How Does the Billings Method of Family Planning Work?

The Billings method is a natural method of identifying a woman's fertile period through an analysis of the cervical mucus, and which can be used to prevent an unplanned pregnancy from occurring. 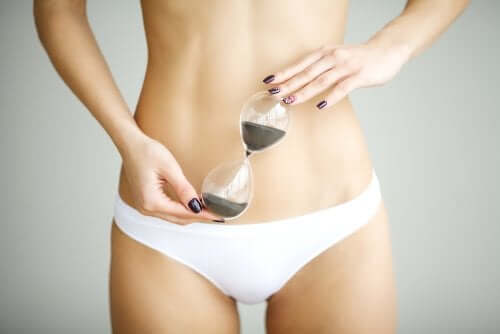 These days, many families like to know and plan for a woman’s fertile periods. As a result, over the years, people have developed many ways to try to avoid unplanned pregnancies. One such method is the Billings method, also known as the cervical mucus method.

What is the Billings method?

Likewise, the hormonal changes that occur during the menstrual cycle work at the level of the cells in the cervix. They modify the characteristics of the cervical mucus and determine the  fertile and infertile phases. When the woman is in her fertile period, this secretion is similar to the white of the raw egg. When she’s in an infertile period, the structure of the cervical mucus forms a kind of barrier. As a result, it doesn’t allow the sperm to enter.

How is it used?

In general, after the end of the menstrual cycle, there’s a dry period that lasts between 2 and 3 days. Then a white mucus begins to appear, which is usually cloudy and sticky. The last day with this appearance is called the apex of the mucus. This means that ovulation has occurred, or is occurring, within the next 24 hours.

The woman should analyze the characteristics of the cervical mucus during this stage. In order to analyze it, she should place her fingers or toilet paper at the entrance to the vagina. After that, she should place the mucus between her index finger and her thumb, and stretch and separate the mucus with them.

According to the Billings method, a woman shouldn’t have unprotected sex until the fourth day after the apex. This is because she’s in her fertile period and could have an unplanned pregnancy.

How effective is the Billings method?

According to research conducted by Centro Médico ABC in Mexico, there have been several studies to determine the effectiveness of the Billings method. They point out that a study conducted by the World Health Organization included 725 women from five different countries. The results were published in 1981.

They found that this method has an efficacy of 97% when used correctly and 77% with typical use. The difference in efficacy between the correct use and the typical use shows us that it can be quite complex to teach and learn this method.

According to research by Dr. Evelyn Billings and Dr. Ann Westmore, with the advent of the Billings method, women stopped resorting to other methods, such as the rhythm method.

Phases of the menstrual cycle

There are several identifiable phases of the menstrual cycle. Although each may vary from woman to woman, they have distinctive characteristics in common.

Firstly, we have the bleeding phase. Menstruation usually lasts four or five days. At the beginning of menstruation, the ovaries aren’t very active and only small amounts of reproductive hormones circulate in the bloodstream.

Phase between menstruation and the onset of fertility

Secondly, at the end of the menstrual cycle, the woman experiences a variable interval of infertility before the eggs begin to mature. During this process, the cervix is blocked by a mucus plug that protects the reproductive system from infection and also prevents the entry of sperm.

The discovery of cervical mucus

Dr. John Billings, the creator of the method, began work on his research on the basis that women should recognize when they’re fertile or infertile using the flow they could see and feel in the vaginal opening.

At the time, that Dr. Billings did his research into the available medical literature, he found several mentions of the mucus produced by the cells that line the cervix near the time of ovulation. Although many gynecologists had studied these changes, women didn’t know about cervical mucus and its changes.

According to the book The Billings Method: Using the Natural Fertility Indicator to Achieve or Prevent Pregnancy, written by Dr. Evelyn Billings and Dr. Ann Westmore, the study of cervical mucus allows all women to get to know and identify their fertile phase. This is something that they claim other methods don’t show us.

In short, each of the methods that families use must be approved by a specialist. Even though the Billings method doesn’t involve the use of medication or controlled techniques, it’s still essential to study its benefits and possible effectiveness in order to prevent an unplanned pregnancy from occurring.

Factors that Influence Time of Conception and Babies’ Development
The health of the parents at the time of conception affects the baby's development from gestation onward. Read more in this article! Read more »
Link copied!
Interesting Articles
Before conception
Supplements During Pregnancy: Folic Acid, Iodine and Vitamin B12