How Does the Ovarian Reserve Affect Fertility?

Identifying the number of ovules a woman has can be a determining factor in knowing her chances of conceiving. We'll tell you what the ovarian reserve is, why it constantly decreases, and how it's measured. 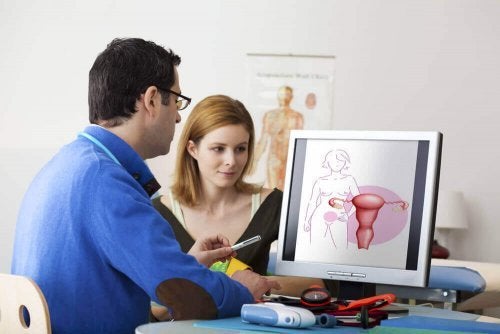 Have you ever heard of the ovarian reserve? It refers to the amount of eggs that a woman has at a given time.

Depending on the result of this number, the chances of pregnancy can alter. Do you know how the ovarian reserve affects female fertility?

The ovarian reserve is a key factor for women’s fertility. When a woman is born, the total number of oocytes that she has is around one million. When puberty and the menstrual cycle take place, this amount drops considerably. In fact, they’re cut in half at puberty.

The amount of ovules that a woman can count on at a certain time in her life is of vital importance when trying to get pregnant.

How are they counted? What number indicates an alarm signal? What factors affect the ovarian reserve? We’ll address these questions now.

How is the ovarian reserve measured?

There are three methods used to calculate a woman’s ovarian reserve. These are:

These tests not only allow us to know if a woman suffers from fertility problems and to determine what her chances of conceiving are, but they also serve to measure the chances of success in an assisted reproduction treatment.

What is a normal ovarian reserve?

From the age of 16 to approximately 35, the amount of oocytes in a woman’s body is usually good.

However, around this age, they begin to drop drastically, as the body prepares for menopause. This can vary in each woman and it will also depend on not having alterations, such as early menopause.

The values considered normal for each measurement are the following:

As we pointed out before, these indicators are fundamental for women’s possibilities of conceiving. The reason is that the antral follicles, which are the structures where the ovules mature, and the hormones we were describing earlier, are the elemental components for this process.

Measuring the ovarian reserve will allow a woman to know what her chances are of conceiving. It’s also important information for family planning, as it helps determine the chances of being a mother in the future.

“From the age of 16 to approximately 35, the amount of oocytes in a woman’s body is usually good. However, around this age, they begin to drop drastically.”

Factors that reduce the ovarian reserve

The main factor that determines a woman’s ovarian reserve is age. Onwards from the age of 35 – it can happen later in some women – the number of ovules in their body begins to drastically decrease.

Although, in addition to the inexorable passage of time, we can point out other reasons that can lead to this decline – including complex medical treatments such as radiotherapy or chemotherapy.

Likewise, life habits and environmental conditions can have an influence. This includes stress, a woman’s weight and physical condition, daily exposure to environmental pollution (especially if she’s in contact with toxins and pesticides), and harmful habits like smoking.

What to do when your ovarian reserve decreases

When the indicators are low, it doesn’t mean that a woman can no longer conceive. In truth, it’s possible for it to happen naturally, but it’s difficult.

However, modern assisted fertility treatments can resolve most of the complications that may arise. In vitro fertilization is the most sought out method in these cases.

Undoubtedly, the extent to which the ovarian reserve affects a woman’s fertility is clear. It’s a fundamental indicator that can help you take action and plan the future in the best way.