Home » Pregnancy » I want to be a mom » Infertility

Low Ovarian Reserve: What You Need to Know

Having a low ovarian reserve is synonymous with difficulties when it comes to conceiving. In the following article, we'll tell you all you need to know about this issue. Take note! 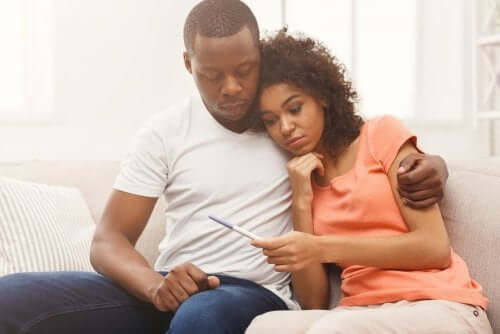 In order for pregnancy to take place naturally, it’s not enough to have an ample supply of quality sperm. It’s also essential for women to have a good ovarian supply. This is a key element when it comes to fertility and has to do with the number of ovarian follicles a woman has.

When it comes to men, their bodies constantly replenish their sperms from the time they reach puberty. However, the case is much different in women. Women have a predetermined amount of ovarian follicles from the time they’re born. And over time, this number goes down.

Without a doubt, the probability of becoming pregnant bears a direct relationship with a woman’s ovarian reserves. In this regard, the more follicles a woman has, the greater her chances are of conceiving.

As women get older, the number of ovarian follicles she has will decrease. And, at the same time, the quality of these follicle deteriorates. That being said, the rate of the alteration of these reserves is unique in every woman.

In fact, the regulation and number of ovarian follicles vary from one woman to another as well. Environmental factors, such as chemical contaminants, stress, and electromagnetic waves, all play a role.

These factors can modulate gene expression and, therefore, affect the regulation of the ovary and its corresponding eggs. In consequence, this can affect the speed at which a woman’s ovarian reserve depletes… leading to ovarian insufficiency and, therefore, feminine infertility.

The term ovarian reserve refers to an evaluation of the number of ovarian follicles present in a woman’s ovaries at any point in her life. What’s more, it indicates what point a woman is in her reproductive period and approximately how long that period may last.

Ovaries are able to produce eggs as a result of stimulation. And this ability is known as ovarian reserve, which is closely related to a woman’s age. In fact, a woman’s ovarian reserve remains stable until she reaches the age of 35, and then begins to gradually decrease.

Ovarian reserve is determined genetically and, therefore, is individual, regardless of a woman’s age. As we mentioned before, some conditions can reduce a woman’s ovarian reserve.

However, it’s important to understand the implications of a woman’s ovarian reserve. The evaluation of this reserve is one of the first steps when it comes to determining a couple’s fertility. It also indicates the level of medical urgency.

At the same time, don’t forget that ovarian reserve is one of the factors that limit a woman’s chances of becoming pregnant naturally. And, finally, it determines the success rate of assisted reproduction treatments.

Ovarian reserve and the chances of conceiving

The likeliness of conception doesn’t depend only on a woman’s ovarian reserve, but also on her age. For example, there are cases of women who are 30 years old and have a low ovarian reserve. However, while they have few eggs, these eggs are of high quality.

At the same time, there may be women who are 40 years old and have a more abundant reserve. However, the eggs are of lower quality. This indicates that the ovarian age of a woman doesn’t coincide exactly with her biological age. Rather, it’s a perfect demonstration of the fact that women with the same biological age can have varying ovarian reserves.

Is the preservation of a woman’s reserve possible?

It’s also important to keep in mind some environmental factors that can affect the production of follicles during life in the uterus. For example, smoking cigarettes and certain medical treatments (such as chemotherapy) can cause menopause to occur sooner, thus affecting ovarian reserve. Experts also believe the same is true in the case of exposure to toxic agents.

Fortunately, it’s good to know that you can preserve your ovarian reserve by following a healthy lifestyle. This means you should maintain a healthy and balanced diet, stay physically active and, if possible, stay away from cigarettes.

Premature Menopause and Pregnancy
When women younger than 40 stop ovulating and their menstrual period disappears, it is known as premature menopause. It can produce additional symptoms. Read more »
Link copied!
Interesting Articles
Infertility
The Right Diet for Increasing a Woman's Fertility

Infertility
All You Need to Know About Assisted Reproduction?

Assisted reproduction refers to the set of medical and technical treatments that allow for pregnancy when natural conception doesn't occur.…

Infertility
What Is Hysterosalpingography (HSG)?

Hysterosalpingography (HSG) is a procedure used to determine the fertility of women who want to become pregnant. Since this test…