What if something happens to the baby, or if childbirth will be really painful, or if your relationship will suffer... These are some of the most common negative thoughts during pregnancy. Learn to control them when they appear. 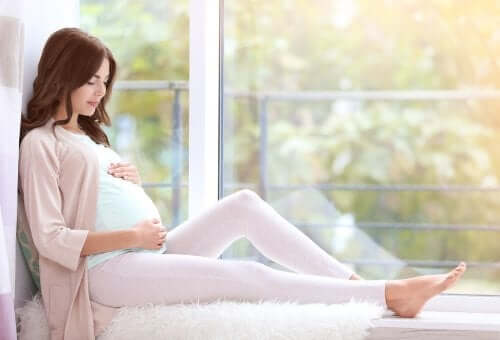 When you find out you’re expecting a baby, many feelings invade you. Besides the beautiful emotions, there are many common negative thoughts during pregnancy as well.

You’re not the only one who’s had them, so don’t fret. We’ll talk about the most common ones in this article as well as ways to help cope with them.

During pregnancy it’s normal to feel fear, think that you’re not ready to be a mother, or not have the faintest idea of how to raise a baby. Many women believe that negative thoughts during pregnancy is a sign that they’re going to be “bad mothers” right from the get-go. But nothing could be further from the truth!

Although the people around you may want to make you feel better with words of encouragement, you just feel worse and worse. Instead of enjoying what’s supposed to be a woman’s best moments, doubts and pessimistic ideas invade your mind.

There are different types of negative thoughts during pregnancy. While some women experience all of them, others only a few. The problem lies in how many times a day you think of them or how they make you feel.

You need to bear in mind that these thoughts are based on uncertainty, anxiety, and lack of knowledge. The most common negative thoughts during pregnancy are:

First of all, it’s normal for pregnant women to be afraid that their baby will suffer from a serious illness or that something bad will happen during your pregnancy or after the baby is born.

The main fear of mothers is not feeling their baby move inside them. Also, many pregnant women fear that their baby will be born preterm.

From the moment you found out you were pregnant, you became obsessed with childbirth videos or asked your friends and relatives who have children about childbirth.

Will it hurt a lot? Will I suffer like in movies? Am I not going to know when contractions start? Those are the most common questions pregnant women ask.

Undeniably, parenting is a challenge and you can’t know for sure what will happen, how you’ll raise your child, or how many mistakes you’ll make. Among the negative thoughts during pregnancy, you can’t ignore the feeling that you’ll be the worst mother in the world, that you won’t know how to act, or that you’ll have to give up on many things for your child.

When a couple becomes pregnant, many things change. The relationship obviously won’t be the same. However, it doesn’t mean it’ll be bad, simply different from now on.

Some women are afraid that something will happen to their partner and that they’ll be alone during the pregnancy and will also have to raise their baby by themselves. In addition, others think that the relationship will stagnate or won’t be as stable.

Negative thoughts during pregnancy are repetitive and automatic, cause a lot of fear and insecurity, and are based on everything you don’t want to happen to both you and your baby.

What to do about negative thoughts during pregnancy

Yes, it’s true that bringing a child into the world isn’t easy. However, it’s pointless to become nervous or think about negative things. Although you can’t prevent negative thoughts, you can get them out of your mind by doing pleasurable activities such as:

You can play your favorite song and sing it out loud or look for something quieter (for example, classical music, jazz, or bossa nova) to reduce your anxiety. You should obviously choose melodies that don’t make you sad or make you remember an unhappy situation.

Exercising during pregnancy is very important (obviously respecting your limits) and taking a walk is always a good way to set bad thoughts aside. You don’t have to take long walks; you can simply walk around your block several times and then come back home.

If you have the opportunity to walk by the beach, in the countryside, or by a natural site, you should definitely do it! You’ll see how quickly you relax and think nice things!

Many pregnant women don’t want to look in the mirror because they think they look fat. But you should do this exercise to praise and flatter yourself for what you’re doing at this very moment: making life!

Therefore, you should stand in front of the mirror, say nice things to yourself, and pamper yourself a little. Caress your belly and tell the little one that’s growing inside you that you’ll be the strongest mother in the entire world and that nothing and nobody will harm you.

A great way to eliminate negative thoughts during pregnancy (and at any stage of life) is meditation. However, it isn’t necessary to go to a Buddhist temple, for example, or anything like that. Just choose the quietest time of day at home, light some incense, play instrumental music, and close your eyes.

Focus on your breathing and make the ideas that come to your mind vanish like the clouds in the sky do when it’s windy.

Negative thoughts during pregnancy are common and all women have them. It’s up to you to reduce them or channel them into something positive!

The Benefits of Meditation During Pregnancy
Meditation during pregnancy has many benefits. It will not only help you feel more relaxed during pregnancy, but it can also help you during labor. Read more »
Link copied!
Interesting Articles
I'm going to be a mom
15 Boys and Girls' Names Inspired by Astronomy