Spotting During the First Trimester: Is It Serious?

Spotting during the first trimester is one of the most common symptoms that occurs during pregnancy. Today, we'll take a closer look at this common occurrence. 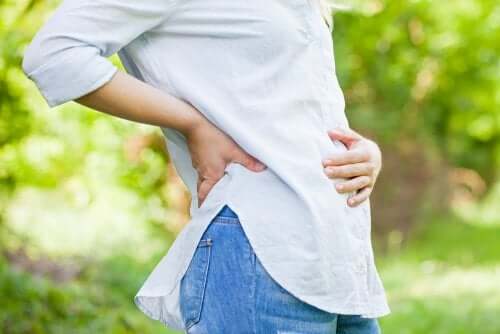 Spotting during the first trimester is one of the most common symptoms that pregnant women experience. What’s more, it’s also one of their greatest causes of concern. The changes that occur in a woman’s body during gestation are numerous and can affect different symptoms, starting at the moment of implantation.

Knowing the most common signs and symptoms can help reduce the fear and worry that many women feel.

The first signs of pregnancy

Most women know that the absence of menstruation is the first sign of a possible pregnancy. Therefore, when women notice that they’re “late”, they usually go on to take a pregnancy test. This can mean either a urine test or a blood test.

However, there are other signs that can also appear during the first weeks of pregnancy. For example:

Specialists recommend consulting with a gynecologist or doula as soon as possible if you discover you’re pregnant or think you might be.

An expert will help you understand the common signs and symptoms that arise during the first trimester. That way, you can identify any situations that may require medical attention or observation.

Why does spotting occur during the first trimester?

It’s important to clarify that spotting during the first trimester, whether brownish or reddish in color, isn’t considered cause for alarm.

This spotting is the result of changes that a woman’s vascular system undergoes and coagulation during the first weeks of pregnancy. These factors increase a woman’s chances of experiencing a small amount of vaginal spotting.

This doesn’t mean that spotting occurs in all women or in all pregnancies. Spotting during the first trimester is a sign that may appear in relationship to changes in the uterus. But it’s not a necessary symptom during pregnancy. In other words, the absence of spotting isn’t a cause for alarm.

It’s also very common for a small amount of spotting to occur during the first trimester after having sexual intercourse. Once again, there’s no need for alarm, nor do you need to stop having sex unless your gynecologist recommends it.

What are the causes for alarm?

Below is a list of certain situations that do require urgent medical attention:

In the case of any of these symptoms, you should seek urgent medical attention. These signs may have to do with other situations that don’t affect your pregnancy. Therefore, it’s always best to see a doctor before coming to any negative conclusions.

Recommendations associated with bedrest usually have to do with the presence of a hematoma. Hematomas can be detected by ultrasound and usually appear with menstrual-type bleeding.

Many women feel guilty when they experience any type of spotting during the first trimester. As a result, they may try to limit the activity they believe to have been the cause of the episode.

However, it’s important to point out that there is no type of physical activity that increases your risks of spotting. Only extreme situations like violent bumps or intense exercise that you’ve never done before can produce changes in your body that put you at risk.

3 Cheesy Recipes for the First Trimester of Pregnancy
Do you like cheese? We have great news: you shouldn't eat less dairy during pregnancy. Find out 3 cheesy recipes for the first first trimester. Read more »
Link copied!
Interesting Articles
Pregnancy symptoms
How to Treat Nausea and Vomiting During Pregnancy

Nausea and vomiting during pregnancy are the most common symptoms that women experience. This is especially true during the first…

In general, it's usually in the fifth month of pregnancy that a woman may start to leak small amounts of…

Pregnancy symptoms
What Is the Chadwick Sign During Pregnancy?

The absence or delay in menstruation is usually one of the first symptoms of pregnancy, but it isn't a determining…