What Is Pregorexia? Symptoms and Consequences

Some women don't want to gain weight during pregnancy, although pregorexia is even more extreme. It's an eating disorder that can have many negative consequences for the mother and the baby. 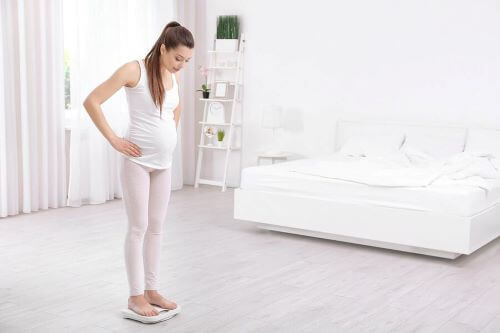 Basically, Pregorexia is an eating disorder in pregnant women. It occurs when a pregnant woman wants to maintain the body weight she had before getting pregnant.

Undoubtedly, this is a serious problem, because pregnant women with this condition reduce the number of calories they eat and increase the amount of exercise. We’ll tell you more about pregorexia in the article below.

As a first measure, it’s good to know why it’s called pregorexia. It comes from the English word for pregnancy and the word anorexia.

The name for the condition aptly reflects the nature of the disorder. It concerns pregnant women who follow very restrictive diets, and who also engage in extreme amounts of exercise in an attempt to avoid weight gain. They may also binge eat and purge with laxatives.

Pregorexia is more common in women who already had an eating disorder before becoming pregnant (for example, bulimia or anorexia nervosa). However, it can certainly develop in any future mother without a prior manifestation of the disorder.

One set of data that worries doctors is that 30% of pregnant women don’t eat as they should during pregnancy, but pregorexia is more extreme. It only affects a very small percentage of the female population, although we have to be aware of the disorder.

A woman who suffers from pregorexia is considered to have a “risky pregnancy.” That is to say, while the pregnant mother loses weight (instead of gaining it as she should) the fetus isn’t getting the nutrients it needs to develop.

Anorexia nervosa during pregnancy is closely linked to the fear among some women of losing their figure and gaining an exceeding amount of weight while expecting a baby. Clearly, in many cases, this fear is unfounded, because it’s based on a distorted body image.

What are the symptoms of pregorexia?

In addition to the worry about her figure, the habits of the pregnant woman don’t allow her to gain weight. This can be very dangerous, as much for her as for her child. Some of the characteristics of pregorexia are the following:

“While the woman with pregorexia loses weight and doesn’t gain as she should, the fetus won’t get the nutrients that it needs to develop.”

What are the consequences of having an eating disorder while pregnant?

This type of anorexia that manifests in pregnancy can have terrible consequences, both for the mother as well as the fetus. Neither will receive the amount of nutrition they need.

For the woman, some of the effects of pregorexia are the following:

In addition, we should note the consequences for the fetus if the mother suffers from pregorexia. Some of them are:

Because this is a disease that develops at the psychological and emotional level, once pregorexia is detected, a treatment plan should be put in place and overseen by various professionals. Principally a therapist should intervene, who will identify the reason for the disorder and why the problem arose.

Also, the obstetrician and a nutritionist can guide the woman so she adopts healthier habits and pays attention to her own health and that of her baby. And of course, the help of her partner and her family is fundamental in these cases.

Factors that Influence Time of Conception and Babies’ Development
The health of the parents at the time of conception affects the baby's development from gestation onward. Read more in this article! Read more »
Link copied!
Interesting Articles
Preparing for childbirth
Self-Hypnosis in Childbirth: What You Should Know