10 Tips to Quit Smoking If You're Pregnant

Many mothers have the ability and will to stop smoking when they become pregnant. But sometimes it's not so easy. The simple tricks discussed here are beneficial when you're having trouble quitting. 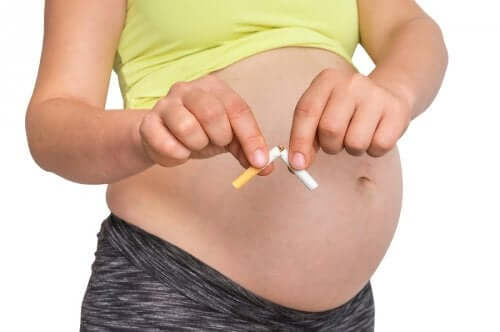 All women know that being a mother means having to make many life changes, and that it’s important to quit smoking while you’re pregnant as soon as possible.

If you feel identified with what we’ve just described, you’ll find these tricks to stop smoking while you’re pregnant extremely useful. Below, we’ll list some tips that will be of great help to you.

However, these suggestions can be helpful to anyone looking to conceive. In which case, you know that cigarettes must be left behind.

Some women stop smoking as soon as they know they’re pregnant; this, of course, is an excellent decision. Ideally, you should be toxin-free for at least three months before the embryo forms.

Why should I quit smoking if I’m pregnant?

Among the risks of smoking for the fetus, we can mention:

On the other hand, the mother’s body changes when she becomes pregnant, and she also becomes prone to diseases such as:

There are several myths regarding smoking and quitting during pregnancy. One of them is that the anxiety caused by the absence of cigarettes does more harm than smoking itself.

Although it isn’t ideal to feel anxious while you’re pregnant, the withdrawal symptoms due to the lack of nicotine are still preferable to the toxic chemicals you ingest when you smoke.

Some say that smoking less is an acceptable alternative for those who can’t quit nicotine altogether. However, people who try to regulate their consumption in this way end up inhaling more smoke because they inhale more intensely when they do smoke.

Along with these tricks to stop smoking, you must maintain a positive mentality. That way, it’ll be easier for you to take the necessary steps. As explained above, smoking slows the heart rate and raises blood pressure; both which are negative consequences for pregnancy.

The withdrawal symptoms due to the lack of nicotine are still preferable to the toxic chemicals ingested while smoking.

In short, simply live, breathe, and try not to overthink, just let yourself flow. When you decide to quit smoking because you’re pregnant, you’re taking your first conscious steps towards motherhood. Be confident, you’ll make it!

Signs that Your Teenager is Smoking Tobacco
If you're worried whether your teenager is smoking, you should know that your concern makes sense. Learn about the common warning signs here. Read more »
Link copied!
Interesting Articles
Preparing for childbirth
Self-Hypnosis in Childbirth: What You Should Know