Many women are afraid of having a twisted umbilical cord because it's considered a complication during childbirth. Knowing about it is important. 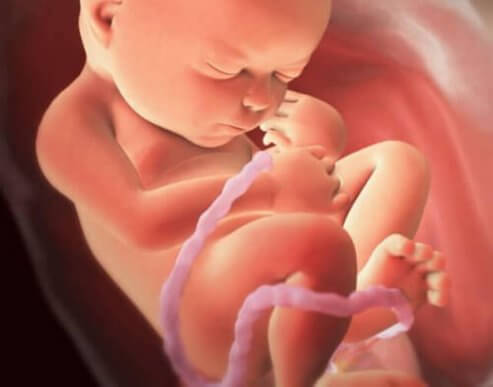 One of the biggest concerns among parents and doctors is having a twisted umbilical cord during pregnancy and childbirth. It’s important to be informed.

What is a twisted umbilical cord?

A twisted umbilical cord is considered to be a very serious complication during pregnancy. It’s associated with fetal distress and complications during delivery.

Before answering the question of whether or not it’s something dangerous, it’s important to know a little more about the umbilical cord. It’s 21.5 inches long.

Due to its length, it’s normal for it to get tangled with different parts of the body: arms, legs, trunk and neck.

Of course, the severity of the situation depends on where the cord is tangled, as well as how wrapped it is around one place. Often, with a simple movement, the cord can untangle itself.

In order for a twisted umbilical cord to happen, there must be several other factors. For example, it could be longer than normal, or the placenta might have more amniotic fluid. Therefore, there’s more free space for the cord to move around.

Although it may seem extraordinary and abnormal, over 40% of pregnancies have a twisted umbilical cord at some point, mainly during childbirth. Mothers find out through ultrasounds. However, there are also cases where you don’t notice it until birth.

Is a twisted umbilical cord dangerous?

In most cases, it doesn’t cause problems for the fetus. They can still have a vaginal birth. The doctor places a finger between the baby’s neck and the cord to avoid pressure and possible suffocation. Another option is to clamp the cord and cut it before the baby comes out completely.

Commonly, the cord twists when the baby’s heart beats faster. However, this doesn’t happen 100% of the time. Increased heart rate can be due to using certain medications to accelerate childbirth. The cord twists if the baby doesn’t handle this well.

It’s true that there are cases where fetuses have a very tight cord. The pressure on the carotid arteries cause bradycardia.

In this situation, doctors need to check on fetal distress and decide how to continue. They’ll figure out if they need to do an emergency c-section, or wait for the baby to move to stop the cord from twisting.

Additionally, we need to talk about the umbilical cord prolapse. When this happens, the cord comes out before the fetus. Generally, this happens when they’re born breech.

It could also happen because the amniotic sac broke before the baby was ready. This complication is the most serious of them all. However, it has nothing to do with a twisted umbilical cord. It has to do with issues that stop the baby’s blood flow.

Complications in childbirth: what to know

Most babies are born without problems, especially when the mother has been to every necessary appointment. However, certain complications can still appear. A twisted umbilical cord is just one of them.

Other possible complications include:

1. No progress of labor

Labor changes because there are less contractions, or the cervix isn’t dilated enough. This usually happens when there is a disproportion between the mother’s pelvis and the size of the baby’s head.

Changes in the heart rate of the fetus can cause complications because he isn’t receiving the oxygen he needs. The doctor will perform a c-section before the situation gets worse, and before the baby breathes in the meconium that causes lung problems.

This serious complication happens when the placenta separates from the uterus before delivery. It can cause internal bleeding for the mother, as well as interrupts the baby’s blood and oxygen supply.

A twisted umbilical cord may seem somewhat traumatic for babies. However, they’re actually very common, and usually don’t have any serious consequences for your health or your baby’s.

How to Take Care of Your Newborn’s Umbilical Cord Stump
There are many different theories about how to care for a baby's umbilical cord stump. So, what should new parents keep in mind? Read more »
Link copied!
Interesting Articles
Stages of labor and birth
What Is External Cephalic Version?