Although it may seem like a harmless social network, there are many risks of being on Instagram for children and adolescents. Therefore, parents must supervise, educate, and accompany their children while they're participating in these kinds of activities. 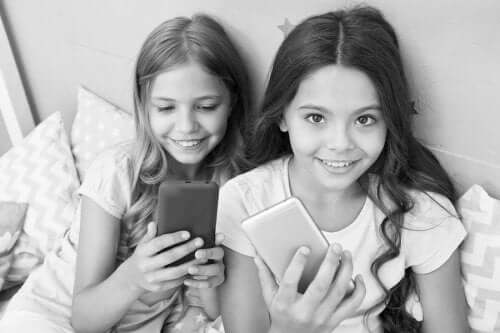 One of the most popular social networks today is Instagram. It’s appealing because its interface is straightforward and also has a mainly visual format. Through it, photos are shared between users from all over the world, at any time and place. Thus, publishing photos becomes very easy and even turns into an everyday thing.

In recent years, this network is what has led to an increasing trend of taking what has become known as “selfies.” And while not all children and adolescents misuse it, the truth is that there is still much to say when it comes to educating children and teenagers about the risks of Instagram.

As parents, it’s essential to be well informed of the different technological advances in order to be able to guide children properly. It’s also necessary to learn how to evaluate the possible risks of using social networks. Therefore, we must be attentive.

From the point of view of young people, uploading photos and sharing personal data isn’t a bad thing to do. However, not everyone has good intentions. Too often, there are those who try to take advantage of children’s innocence for improper purposes, such as impersonating identities, harassing, or consolidating a sexual offense.

By becoming so popular, this social network isn’t just attractive, but it’s also very influential, both around children and adolescents.

Youngsters nowadays give too much importance to social media and dedicate themselves to publish content in order to obtain approval and social recognition and, of course, immediate satisfaction.

Instead of prohibiting young people from using social networks, it’s best to teach them to protect themselves and to recognize the dangers to which they can be exposed if they aren’t careful.

When it comes to children, perhaps, it would be best if they didn’t have access to social networks altogether. However, if parents have allowed their children to have accounts, they should make sure to monitor them regularly to avoid problems, both short and long term.

Some of the dangers that come with using Instagram for children and teenagers are:

As we all know, on social networks, we can share personal data that can jeopardize the privacy and even the integrity of someone else. Often, the child can be revealed from a photo, or even telephone numbers can be made public. Therefore, parents must monitor the information that their children publish online very carefully.

Bullying isn’t a new issue; in fact, it has perpetuated over the years as a severe problem in schools. With the emergence of social networks, as is the case of Instagram, “cyberbullying” has appeared.

Nowadays, children and adolescents become victims of harassment through a social network.

One of the most potent risks of using Instagram for children and teenagers is generating an addiction, which may appear due to the dynamic and visual nature of this social network. Another critical point to note is that it’s really easy to install and use, which makes it much more accessible.

4. It’s also been related to a tendency to suffering depression

According to a study by the Royal Society of Public Health and the University of Cambridge, young people who spend more than two hours a day on social networks are more likely to suffer from mental health problems, such as anxiety, symptoms of stress, and depression.

The study’s authors argued that “being a teenager is already difficult enough, but the pressures that young people face online are undoubtedly unique to this digital generation. It’s vitally important that we intervene by putting preventive measures.” Thus, too much time on social networks like Instagram can be harmful to children and young people.

According to the Royal Society of Public Health and the University of Cambridge, Instagram could be the most damaging social network.

Keys to protecting your young ones

It’s difficult for children and adolescents to stop using social networks because it’s attractive enough for them, but parents can take some actions to protect their children. Here are some tips to reduce the risks of using Instagram for children and teenagers:

In the case of younger children, it’s important that parents always monitor the photos their children upload on their profile. When it comes to teenagers, it’s essential to communicate the risks of publishing private photographs or data such as location.

At present, it’s difficult to prevent children and adolescents from using social networks, because it’s become a part of society. So parents should always supervise and advise their children and teenagers.