Incessant digital activity defines the world we live in today, and social media poses a certain risk for children. Can parents check their children's social media in order to keep them safe? 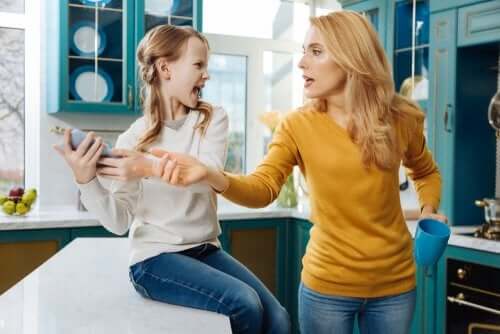 Can parents check their children’s social media activity without or against their consent? In the article below, we’ll help you reflect more on what type of control parents should practice over their children’s internet use.

Social media has become a worldwide social phenomenon. So much so that it has changed the way we communicate and even the way we live. For parents, this can turn into a major headache.

Without a doubt, it’s natural for children and teens to feel the need to belong to some virtual community their friends are part of. It’s also normal for their parents to allow them to do that.

However, parental control is fundamental when it comes to the use of technology and social media, given the risks they pose.

This isn’t always a simple task, and can definitely be a cause for conflicts among parents and children. Most teens aren’t okay with their parents checking their social media or text messages.

How to control your children’s social media activity

When parents intrude on their adolescent children’s social media, it will always be a motive for conflict. And it’s usually counterproductive when parents try to impose on their children by, for example, prohibiting internet use.

Kids can easily find a way to get around these rules and will just end up creating a new profile or changing their privacy settings.

It’s also important to remember that not everything about social media is negative. It’s a good way for children to learn to socialize and form a circle of friends. The best solution is to control your teen’s social media activity, but not restrict it.

It’s important to establish certain limits in order to know where your children are spending their time online.

It all depends on your child’s age. When children start to use social media, it’s good to set up certain schedules and time limits. It’s also important to guide them and explain a few things about the dangers that exist online.

For example, it’s a good idea for parents to be among their children’s social media contacts (“followers” or “friends”).

Ideally, we should look for a middle ground where children feel free to share their internet use with their parents. Then, over time, they can become more and more responsible with how they use social media.

Parents, at the same time, should respect their children’s privacy and establish certain progressive guidelines and controls.

According to article 16 of the UN Convention on the Rights of Children (UNCRC): “No child shall be subjected to arbitrary or unlawful interference with his or her privacy, family, home or correspondence, nor too unlawful attacks on his or her honor and reputation.”

Many view this to be a prohibition for parents when it comes to checking their children’s social media. However, the question at issue is in reality much broader. The law addresses the importance of education regarding media and the incorporation of digital technology in the daily life of children and teens.

It’s clear that prohibiting or controlling the use of social media among teens is practically impossible. Sooner or later, they’ll find a way to get around these controls.

Parents should focus on strengthening the competencies of parents and adults. In general, they need to act as intermediaries in their children’s use of social media.

Do parents have the right to check their children’s social media without their consent?

During the stage of adolescence, most teens tend to distance themselves from their parents. At the same time, they seek refuge in their circle of friends. This can often cause parents to become concerned. For example, they may begin to suspect that their children have some sort of problem.

In these situations, parents are responsible for the care and protection of their children. This means that parents have the right to utilize strategies to look into their children’s private life in order to find out what’s going on, and be able to intervene.

As long as parents do so with their children’s best interest in mind, their actions can be considered legally justified. This includes checking their children’s social media, private messages, Whatsapp, etc.

At What Age Should Children Start Using Social Media?
While the benefits of social media may be important, there's also a certain degree of risk. At what age is it safe for children to start using social media? Read more »
Link copied!
Interesting Articles
Relating to their surroundings
Social Media Platforms: Is TikTok the Most Popular One?