The Best Foods to Eat During Menstruation

During their period, women eliminate toxins as well as certain nutrients. With that in mind, we want to tell you about the best foods to eat during menstruation. 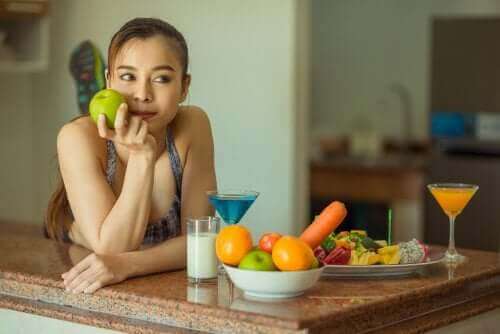 Before discovering the most beneficial foods to eat during menstruation, it’s important to understand the menstrual cycle. This cycle consists of four phases differentiated by the type of predominant hormones.

The best foods to eat during menstruation

Iron, the basic nutrient among the foods you should eat during menstruation

You can find iron in both animal and plant-based foods, although the former is easier for the body to absorb. However, we can increase assimilation by eating it along with foods that are rich in vitamin C in the same meal. For example, lemon juice, peppers, oranges, tangerines, or kiwi. It’s also advisable to avoid dairy products and coffee, since they make absorption difficult.

They’re rich in magnesium and also in folic acid, so encouraging their consumption at this stage helps reduce menstrual cramps and the characteristic headaches. In addition, folate is key in case you want to get pregnant.

The recommendation is to incorporate them in at least one main meal per day, especially raw. You can eat them in a salad or make a green shake with other vegetables and spices. This group includes lettuce, corn salad, arugula, endive, celery, spinach, chard, cabbage, and broccoli.

Normally, the values of this mineral are directly related to magnesium, since they’re antagonistic. In addition, as levels drop, swelling and fluid retention is greater. It even increases the risk of fracture and osteoporosis. Therefore, it’s essential to cover the recommended doses in order to prevent complications.


Here it’s important to emphasize that dairy products aren’t the exclusive source of calcium. Rather, you can get it from almonds, the cruciferous family (cabbage, broccoli, cauliflower, etc.), white beans, and sardines.

Fruits, vegetables and spices, other of the most beneficial foods during menstruation

As we’ve commented before, menstruation is a detoxification stage, therefore, you need to include antioxidants in your diet. You can find them mainly in brightly colored fruits and vegetables like pumpkin, bell pepper, sweet potato, tomato, carrot, grapes, watermelon, etc.). Green tea and spices such as turmeric or ginger are also sources of antioxidants.

In summary, following a varied, vegetable-based diet during menstruation is key to feeling better and replenishing all the nutrients that are lost due to the physiological processes generated at this stage. You can even reduce the discomfort.

Every year, students must take a number of tests – both professor-designed and standardized. And their performance on these tests…

Are you and your teenagers having a hard time getting along during lockdown? Do you wish you could share some…

Indigestion, or dyspepsia, are the terms given to the different ailments that result from overeating and other excesses. This tends…

Breast exams include several essential tests that help you control your breast health. These tests include mammography and breast ultrasound,…

Our body image is what we think and feel about our body, which may or may not coincide with reality.…

Healthy habits
Why Do Women Live Longer than Men?

Why do women live longer than men? It isn't true in all cases, of course. However, it's a fact that,…