Toxic Friendships in Adolescence and How to Deal with Them

Adolescence is a time when social opinions are of great importance, especially those coming from their group of friends. Toxic friendships in adolescence directly affect a teenager's self-concept and are very harmful to them. 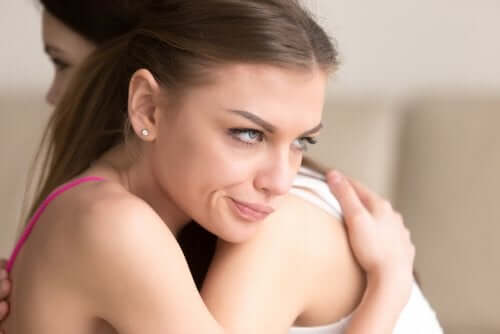 To what extent are toxic friendships in adolescence dangerous? Toxic friendships can occur with people in your life that you have a reasonably good relationship with, and even enjoy their company. However, they make hurtful comments, and criticize what you do or your tastes, among other things.

These people will probably say they’re happy when things go well for you, but they’ll always want to be one step above you. In other words, they don’t want you to be better than them. And, when comparing both of your achievements, at best, they’ll downplay your achievements and talk up their own.

Why are toxic friendships in adolescence so damaging?

Adolescents are at a stage in their lives when they’re discovering and building their identity. In addition to this, emotions and social opinions play an important role during this time, and this can increase a teen’s vulnerability.

For an adolescent, a frenemy, or toxic friendship, can be highly damaging. Their perception of themselves is largely shaped by the opinions they receive from those around them.

Remember that for a teenager, their friends’ opinion of them is very important. A teenager’s self-concept will be shaped, in part, by the opinions and comments they receive from their friends.

If a teenager hears insults on a daily basis from someone they consider to be their friend, even their best friend, then their self-concept will be affected. Toxic friends reduce an individual’s self-esteem and, as a result, they have a miserable self-concept and a poor sense of self-worth.

How can I help my child cope with toxic friendships?

Talk to your child about what a healthy, positive friendship means

Sometimes teenagers who find themselves in a group of toxic friends don’t know what a positive friendship is. As they’ve never experienced a healthy relationship with friends, they just settle for what they have.

A healthy, positive friendship means respect and mutual support. A good friend is one who talks to you honestly, but with a desire to help you. In other words, they influence you positively.

Encourage them to expand their social circles

Many experts highlight just how healthy it is to relate to people and meet new people. Sociologist Robert Faris argues that social interaction is essential for the development of a normal personality.

However, it’s not a question of your child building up a large number of friendships. We need to remember the sayings “friend of many, friend of none” or “quality is better than quantity.”

It’s more about your child discovering other settings, places, personalities, and other ways of relating. As they meet and establish new friendships, they’ll automatically compare the new relationships with the old ones.

It’s advisable not to interfere directly with your child’s relationship with his or her toxic friends. They should be the one to face that friendship with their toxic friend head-on and decide whether to end it.

If you forbid your child to go out with their friends or criticize them, it may make the situation worse.

Help your child deal with their toxic friendships

It may be that your child recognizes that their toxic friend is really hurting them inside. However, deep down they don’t want to lose that friendship, either because they go to school together or because they’ve been friends since childhood.

In cases like this, before resorting to cutting off the friendship, they can try to learn to deal with the relationship, despite it being toxic. To do this, the teenager must know how to keep an emotional distance from the criticism and scorn they receive. In addition, they should try to develop assertiveness, and learn how to make it known to their friend that they don’t like their actions.

“The only way to have a friend is to be one.”

Ultimately, this will help your child to develop valuable life skills such as conflict resolution, assertiveness, and problem-solving. Even if, as parents, we want to keep those people who are harmful to our children away, we must respect their decision not to break off that friendship.

The important thing about toxic friendships in adolescence is for your child to be aware of how harmful that friend can be to them. Knowing how to keep their distance, not allowing themselves to be manipulated, and knowing how to deal with that relationship in the healthiest possible way are great life skills.

Seeking Popularity Among Teens
Seeking popularity can become an obsession for some teens, and that's when we should take action. Here are some warning signs that you should know. Read more »
Link copied!
Interesting Articles
Relating to their surroundings
Social Media Platforms: Is TikTok the Most Popular One?