5 Facts About Lactose that You Should Know

Lactose is the main sugar or carbohydrate in milk and its production is exclusive to the mammary gland. Read the following article to discover more facts about lactose. 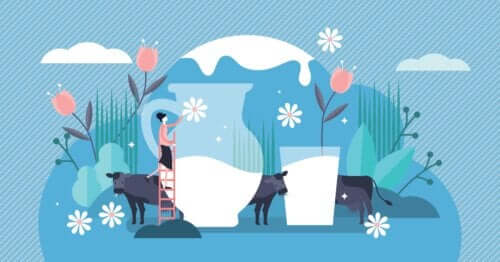 Lactose is made up of glucose and galactose, two simple sugars that the body uses directly as a source of energy and more. Therefore, in this article we’re going to present 5 facts about lactose that you should know.

5 facts about lactose that you should know

First on our list of facts about lactose is the fact that only breast cells can produce this sugar, which is a type of sugar known as a “disaccharide.” This means it’s made up of two simple sugar molecules that are chemically linked: glucose and galactose.

Humans can’t absorb this double sugar when it’s intact, so our bodies need to break that link between the individual sugar molecules. Once glucose and galactose are released, the body absorbs them easily.

2. The ability to use lactose is limited in nature

This feature isn’t necessarily a limitation, rather, it looks like an evolutionary advantage for mammals. We should keep in mind that the most abundant carbohydrates in nature contain concatenated units of glucose. This combines with the fact that bacteria, the most abundant living things in nature, love to eat sugars. Thus, most bacteria possess the necessary machinery to process this type of sugar.

In this context, only bacteria that have the ability to digest lactose could colonize milk, either in the mammary gland or in the baby’s digestive tract. Therefore, the fact that lactose contains glucose/galactose may have offered a protective effect.

The galactose that releases as a result of sucrose digestion has several biological functions. For example, it’s part of several macromolecules that make up the membrane of nerve cells, such as cerebrosides, gangliosides, and mucoproteins.

In addition, galactose is also a component of the molecules present in blood cells that determine ABO blood groups.

It’s easy to assume that the milk of each species has a composition that’s very closely adapted to the needs of its young. In human milk, lactose is the most abundant component.

Human milk contains 7.2% lactose, one of the highest concentrations of sugar in mammalian milks. Surprisingly, it’s not cow’s milk but zebra’s milk, with 7%, that most closely resembles human milk.

Experts recognize that the production of lactose in each species is intimately linked to its evolution and the ecological niche it occupies. Species that fast during lactation, including bears and whales, produce milk with very little lactose. On the other hand, species that lactate for long periods, such as humans, produce milk with a higher concentration of lactose.

Thus, if you have difficulty digesting the lactose in cow’s milk, you’d need to avoid drinking monkey’s milk as well, as it contains 8% lactose. On the other hand, seals produce milk that’s almost lactose free. But watch out, because it also contains 70% fat with a fishy taste. So, it’s probably not the most appetizing option to combine with your cereal!

5. A secret sweet: Industrial use

In addition to food sources of lactose, we find this sugar in small amounts in a wide variety of medications. This use is common due to its excellent properties as a compression excipient.

For this reason, this disaccharide is a frequent component in medicines that come in the form of tablets. However, it’s also available in other pharmaceutical forms, such as capsules or sachets.

However, research has shown that amounts below one gram are harmless to those who don’t digest this sugar well. Therefore, it’s important to know that, in most medicines, there are only a few milligrams of lactose, at most.

3 Fascinating Facts About Breast Milk Fats
Breast milk fats are transported packaged in fat globules. These 'packages' are effective carriers of energy in the form of triglycerides. Read more »
Link copied!
Interesting Articles
Children's diet
What Are the Nutritional Needs of Children?

Many concerns can arise about what our children should eat, since it's important to take care of their health from…

Children's diet
Should You Put Your Child on a Diet?

Childhood obesity is a an important public health problem worldwide. According to the Aladino Study, in Spain the prevalence of…