My Teenager Is Vegan: What Do I Do?

Discover how to help your vegan teenager with their diet with tips and recommendations we'll give you below. 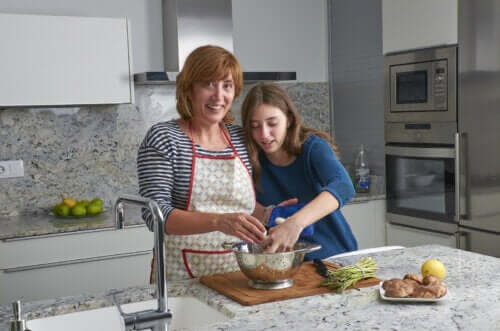 Did you know that young adults are becoming vegetarians more and more? According to the Vegetarian Resource Group, about 0.5% of American youth are vegan. However, if your teenager is vegan, it can be difficult to know how to support them.

Veganism is a lifestyle based on rejecting any product of animal origin, including clothing and shoes, as well as any products tested on animals. Specifically, a vegan diet primarily includes food from plants. As a result, you might have some doubts.

Don’t worry though! In 2016, the American Nutrition Association (ANA) came out in favor of maintaining a vegetarian diet throughout life. Their conclusion was the following:

The Spanish Association of Pediatrics agrees with ANA.

My teenager is vegan: What do I do?

Firstly, you need to listen to your child and be understanding. Second, the main reasons why your children may have decided to become vegan is based on exploitation and animal abuse, as well as the environmental impact generated by the production and consumption of food.

How can you help your vegan teenager plan a balanced diet?

One of the ways for your child to incorporate proteins into their daily diet is to include legumes both at lunch and dinner. They also don’t have to eat them whole, as there are derivatives available in stores, such as tofu, tempeh, textured soybeans, and seitan. These are good options for snacks or meals. The recommended amounts of each food are:

In addition, they should also eat greens and vegetables daily with all meals. Experts recommend 400 g as a minimum.

Regarding grains, these complement legumes because they both lack an amino acid. However, it’s not necessary to incorporate them in the same meal. Consider that, as you eat, they’re stored until the deposit limit is reached.

Try to make sure, as much as possible, that any grains are whole grain. In addition, there are many other options instead of just rice, pasta, bread, and potatoes, such as quinoa, millet, bulgur, sweet potato, and oats.

Finally, you need healthy fats to cook, so you can dress and complete meals with virgin olive oil, avocado, olives, nuts, and seeds.

As an alternative to dairy products, there are now many plant-based drinks and yogurts made with soy, grains (rice and oats), seeds, and nuts. Among the many options, soy is the one that is most similar to milk in terms of nutrients.

When choosing an option, make sure it doesn’t have added sugars in the list of ingredients. It’s also better if your option is enriched with calcium and vitamin D. Any other consideration will depend on your child’s tastes since each one has a different flavor.

Vegan alternatives: Are they healthy?

Generally, the answer is no since they tend to use low-quality ingredients, such as sunflower oil or potato starch and flour. This is the case of any vegan meats or sausages.

However, some companies have stepped up and are creating better products. On the other hand, despite the fact that there are sweets and pastries made with vegetable ingredients, you still should only eat them in moderation.

Potential concerns if your teenager is vegan

Firstly, vitamin B12 is water-soluble and is only found in foods of animal origin, despite the fact that it’s obtained through bacterial synthesis. Its function is to facilitate the synthesis of red blood cells, which is why a deficiency produces megaloblastic anemia. It’s also involved in the formation of myelin, which facilitates the transmission of the nerve impulse. B12 is also responsible for metabolizing homocysteine since it acts as an enzymatic cofactor.

In fact, a deficiency of this vitamin causes neurological damage, such as memory loss, lack of coordination, and paresthesia. As a result, people who follow a vegan diet should supplement with 2000 micrograms a week of cyanocobalamin. You can buy this in health food stores or online.

In addition, it’s also important to monitor the levels through a blood test at least once a year. However, B12 levels in these tests can be unreliable since analogs aren’t distinguishable from active forms. They have similar structure, but not functionality.

Some of this vitamin is also found in plants, such as mushrooms and spirulina algae, which can distort results if you eat them. It also doesn’t indicate that the stores of the carrier protein.

So what parameters do you have to look at? It’s best to look at homocysteine and methylmalonic acid since they accumulate in the body when there is a B12 deficit.

If my teenager is vegan and doesn’t eat dairy, where can they get calcium?

This is the biggest concern when following a vegan diet since many people believe that dairy is the only source of calcium. However, many plant foods have similar or higher calcium content.

You can find calcium in cruciferous vegetables, such as cabbage, cauliflower, broccoli, and Brussel sprouts. You can also find it in white beans, almonds, sesame seeds, and tofu made with calcium salts. As we mentioned earlier, there are even plant-based drinks enriched with this mineral.

Another aspect to take into account is that the content of phytates and oxalates decreases the absorption of calcium so it’s necessary to lower these. How? Using culinary techniques, such as soaking, roasting, sprouting, fermenting, or slow cooking.

How can I prevent iron deficiency and anemia if my teenager is vegan?

Another frequent concern is about the risk of anemia, since plant-sourced iron is absorbed less than that of meat. However, the prevalence is similar to that in people whose diets are omnivorous. The reason is that the body, due to a decrease in iron intake, increases its absorption.

In addition, to promote absorption through food, you can combine food sources with vitamin C, which is found in citrus, pepper, and parsley.

Having a vegan child can be healthy and simple

As you’ve seen, your child can be vegan as long as they have the right information. It’s normal to have doubts at first or try to get your child to change their mind. As a result, we recommend that you visit a dietician or nutritionist with your child to solve any problems and help you with meal planning.

That way you can make sure they’re getting all the nutrients they need to grow healthy and prevent diseases.

Vegan Diets: Are They Recommended for Kids?
Are vegan diets really adviseable for children? Are there any benefits? What could be the dangers? Find out in today's article! Read more »
Link copied!
Interesting Articles
Children's diet
Plant-based Drinks for Babies and Children

Currently, you can find a wide variety of plant-based drinks on the market. These drinks are a great way to…

Throughout history, certain myths about food have been created and, more specifically, myths about child feeding. Many of these misconceptions have managed to condition our choices when it comes to…

A soft diet for children with stomach problems is a temporary solution when their body needs to heal. Although it…

We're all guilty of using desserts as that final treat to make our children eat their food. Children love desserts…

Children's diet
Why Is It Important to Cut Down on Sugar?

Reducing sugar is a vital part of proper nutrition and being completely healthy. It helps us enjoy a higher quality…

Children's diet
All About Nutrition and School Cafeteria Food

In schools around the country, it's common for children to depend on a school cafeteria for at least one meal…