The available evidence on artificial sweeteners doesn't provide clear information about their health effects. So, are they suitable for children? 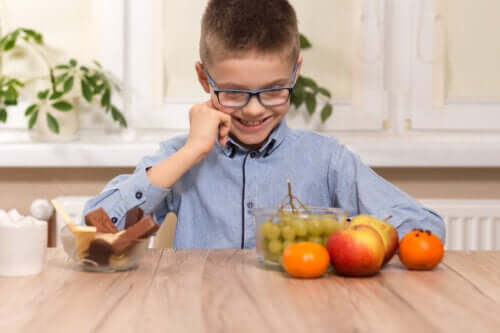 People who suffer from diabetes use artificial sweeteners to replace sugar. However, due to the increase in obesity, a lot of people use them. Evidence has related their consumption to certain effects on health. But, what happens in the case of children?

One thing is clear: they’re safe. At least, that’s what the European Food Safety Authority (EFSA) states. This organization is responsible for evaluating them and deciding on their acceptable daily intake.

According to a study carried out in Buenos Aires, children and teenagers usually don’t exceed the suggested amount. Since most sweeteners are synthetic, breastfed babies and children under 3 years old aren’t allowed to consume them.

An important characteristic of these additives is that they’re sweeter than sugar, so people use smaller amounts. Even so, did you know that consuming them daily increases children’s desire for sweet and more energetic food? This is why it’s important to know how sweet taste perception develops. Next, we’ll tell you how.

When we’re born, we have an innate preference for sweet food, because breast milk has that taste. Also, sweet flavors activate areas in the brain that are related to pleasure.

Furthermore, regular consumption stimulates the intake of similar food. So, the less you eat, the less your palate will get used to it. Remember that during childhood, children develop their taste for food. So, it’s easier to teach them how to have a healthy eating lifestyle.

However, an effective way to reduce sugar consumption is to replace it with small amounts of artificial sweeteners, until they eat less than suggested.

Certain artificial sweeteners, such as acesulfame potassium and saccharine, increase body fat in children. As a consequence, it makes body mass index higher (BMI). However, so far, no studies on children have been carried out regarding stevia.

In addition, these effects are clear when children are over 12 years old. Between 3 and 5 years old, children tend to drink too many sodas, so they consume an excessive amount of artificial sweeteners.

Do artificial sweeteners increase cardiovascular risks and diabetes in children?

In 2018, a research study compared children and teenagers who drank sweetened sodas from those who didn’t. From all the different parameters compared, there was an increase in blood sugar levels.

In the past few years, we’ve seen this happen in the case of fructose intake. That’s why it’s not recommended for people with diabetes. In fact, it used to be a main ingredient in jams and diabetic care products.

In order to prevent diabetes, it’s not a good idea to replace regular sodas with artificially sweetened ones. Finally, there were no changes regarding HDL and LDL cholesterol and triglycerides levels.

Polyols, the new sweeteners in gums and candies

Polyols are part of the few sweeteners that contain calories. Even though their consumption has increased, they can also cause side effects. They may act as laxatives in cases of excessive intake. This is why if a product contains more than 10% of polyols, it has to state it on the label. Also, their consumption is one of the most common reasons for medical consultation regarding poor absorption.

Mechanisms involved in the negative effects of artificial sweeteners in children

Finally, changes in microbiota explain the risk of suffering from obesity or diabetes. Even though investigations are mostly in mice, saccharine and sucralose have proven to promote glucose intolerance, because it makes insulin sensitivity more difficult.

In conclusion, it’s better to teach children to eat natural foods. This will be positive for their health and it will help them avoid the “halo effect” (eating too much of something because they believe it’s healthy). So, the best idea is to drink water and eat fresh fruit, instead of drinking juice.

Why Is It Important to Cut Down on Sugar?
Our health depends greatly on what we eat, which is why it's so important to cut down on sugar in our diet. Read today's article to find out more. Read more »
Link copied!
Interesting Articles
Eating habits for children
The Value of Discipline in Healthy Eating