Emotional Hunger in Children: What You Should Know

Did you know that negative emotions can make you hungry? Next, we'll tell you everything you need to know about this interesting subject. 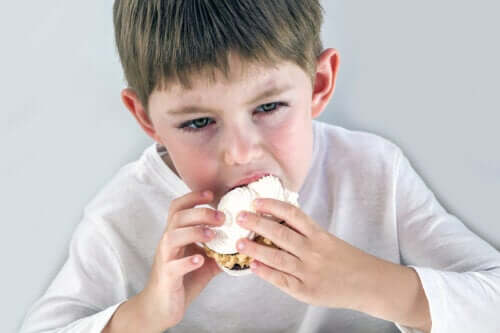 Nowadays, we know that there are two types of hunger: physical hunger and emotional hunger. The first one refers to the hunger we all know. It’s the one we feel in our stomach after spending some time without eating. So, what’s emotional hunger? How can you identify it in children? In this article, you’ll find out.

Before we start on this subject, you should know that food and emotions are closely related. Because, the way we feel in a certain moment reflects on the choices we make when it’s time to eat. And, it also reflects on the amount and the way we eat the food we’ve chosen.

Emotional hunger isn’t in the stomach, it’s “above the neck.” When children are this kind of hungry, it’s because they’re using food as a defense mechanism against negative emotions they don’t know how to handle.

Therefore, children hide their emotions with food. Thus, they start eating food they find comforting, usually the ones which contain high amounts of sugar and fats. However, these binges are useless, since emotional hunger is impossible to satisfy.

According to Ana María Palomino Pérez, nutritionist, some of the negative emotions that lead to emotional eating are rage, apathy, frustration, stress, fear, sadness, anxiety, restlessness, loneliness and boredom.

However, in physiological terms this shouldn’t occur. Because, negative emotions are perceived as threats, which raise blood glucose. And this action decreases or eliminates hunger.

In consequence, we could say that the drive to eat whenever we feel low, isn’t something innate. It’s a socially acquired inadequate behavior.

Signs to identify this type of eating in children

The following are some of the signs that will help you identify when children are emotionally hungry, rather than physically hungry:

How can you avoid emotional hunger in children?

One important thing to bear in mind in order to avoid emotional hunger is that you shouldn’t reward or punish your children with food. If you do it, they’ll relate specific food to certain emotions, which may lead to an unhealthy relationship with food.

In addition, it’s important to make sure your children have healthy eating habits. But, you shouldn’t be too strict because it could be counterproductive. They should follow a balanced diet, monitoring food intake, but they must be able to eat all kinds of food. If you deprive them of certain food, they may feel the need to compensate for that in the future.

Finally and most importantly, in order to avoid emotional hunger in children, their family should teach them emotional education. This is a very important thing to do during their early childhood.

This way, they’ll grow with the necessary cognitive resources to identify and manage their positive and negative emotions. As a result, they won’t have the drive to eat in such an unbalanced way.

Should You Put Your Child on a Diet?
Parents should put their child on a diet and encourage physical activity if they're overweight or obese. Seeing a nutritionist is important. Read more »
Link copied!
Interesting Articles
Eating habits for children
The Value of Discipline in Healthy Eating