Experiments help us understand how children's minds work so that we can get down to a child's level and teach them with love and respect. In this article, we'll look at 3 interesting experiments with children. 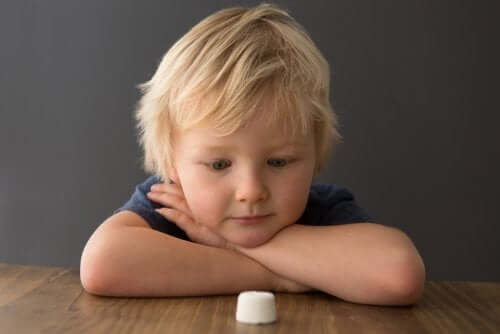 Throughout history, experts have conducted numerous experiments on children in order to better understand their cognitive processes and their resulting behavior. We live in a world dominated by adults who rarely get down to a child’s level to try to understand how their minds work. These interesting experiments with children help us discover how the world looks from an infant’s eyes.

Experts have studied many diverse subjects, but in this article we’re going to focus on three of the most relevant ones. Its results, besides surprising us, will provide us with very useful guidelines in parenting.

This experiment was designed to evaluate the attachment bond between babies and their primary caregiver (the mother). Depending on the mother’s ability to adequately meet the child’s needs, a different type of attachment is established.

From the baby’s behavior we can determine what kind of attachment the child has established with the mother:

2. Experiments with children: The marshmallow test

The objective of this experiment was to evaluate the ability of children between 3 and 6 years of age to defer gratification. To do this, the child was shown into a room and shown a treat. Someone explained to them that if they were able to wait 15 minutes without eating it, they would be rewarded with two treats instead of one.

The children’s strategies to resist the temptation were extremely varied, but, in the end, only 30% of them achieved the goal. The results showed that, over the years, the children who had managed to delay gratification were more competent adults, with better academic performances, more physically active, and less likely to develop addictions.

In this test we tried to find out at what age children develop a theory of mind. This consists of the ability to understand another person’s state of mind and predict their behavior based on it.

In this experiment, the children watch a story all about two dolls, Sally and Anne. Sally has a basket and Anne has a box. Sally puts a marble in her basket and leaves the room. Then, Anne takes it out of the basket and puts it in her box. Sally returns to the room, and, at this point, the children have to guess where they think she’ll look for her marble.

Children of up to four years of age answered that she would look for it in the box. They believed that what they knew was what everyone knew; they were unable to understand Sally’s mental states. This test showed that, until about the age of four, we don’t have the ability to understand that other people think differently from us, and have different beliefs than we do.

These experiments on children show us that their way of seeing the world isn’t the same as that of an adult. Therefore, we must try to forget that we’re adults and get down to their level. Understanding them will help us to raise them with more love and respect.

Heuristic Play: Discovering, Experimenting and Exploring
In this article, we’ll talk about heuristic play, its characteristics, the materials used, the required preparation, and its benefits. Read more »
Link copied!
Interesting Articles
Childhood psychology
Dermatophagia in Children: What Is It and How to Treat It?