Tantrums are common in children, especially among little ones. However, sometimes, you may be dealing with an emotional and behavioral disorder. With that in mind, we want to talk about mood dysregulation disorder. 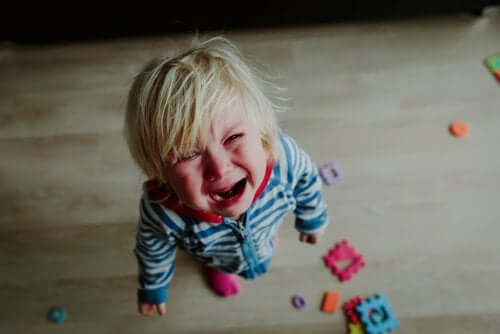 Sometimes it’s difficult for parents to determine when their child’s behavior is within the evolutionary expectations and when a psychological problem exists. The presence of tantrums and behavioral problems in children is frequent, especially at early ages. However, in some cases, you may be facing a disruptive mood dysregulation disorder (DMDD).

Psychology textbooks have recently included this diagnosis. Previously, children who displayed symptoms of this syndrome received a diagnosis of pediatric bipolar disorder. However, there are important differences between the two.

This pattern of irritability and outbursts must occur continuously for at least 12 months to be diagnosed. That is, there can’t be an interruption for a period longer than three months. In addition, the disorder must have begun before the child reaches 10 years of age.

A curious fact is that it’s not possible to diagnose DMDD before the age of six. This is because temper tantrums and angry outbursts are common in preschoolers and it’s not easy to pinpoint when they exceed normal intensity.

The consequences of this disorder are significant. This irritable and angry behavior is highly disruptive, so it greatly affects the child’s functioning at home or at school. In addition, there’s an increased risk of school dropouts and future problems with peer relationships.

Where does DMDD come from?

As with all psychological disorders, there’s no single factor that can explain their presence. However, there are some conditions related to disruptive mood dysregulation disorder. Seventy-five percent of children who have it show a family history of mental health problems. In particular, a parental substance abuse problem may lead to the development of this disorder.

In addition, observations have revealed that parents of these children are more hostile and critical in their relationships with their children. For this reason, it’s a good idea for treatment to involve teaching other models of parenting to adults.

Child abuse and exposure of children to traumatic events are also related to DMDD. Finally, some personality traits such as outgoing temperament, impulsiveness, or reward seeking may favor the presence of this disorder.

As this is a newly established diagnosis, research is still underway to investigate the best treatment options. Certain drugs, such as stimulants or antipsychotics, have been used, with the latter producing good results. Risperidone was able to significantly reduce irritability and aggressive behavior. However, it’s important to exercise caution when administering these drugs to minors, as side effects can be severe.

With regard to psychological treatment, observations have shown that parental collaboration is of particular importance. Children with DMDD seem to be especially sensitive to changes in parenting. Therefore, training for parents, in which they learn strategies to address their child’s symptoms, has offered very good results.

Psychological work with the child will be behavioral. The objectives will be to identify the stressors and triggers that cause anger outbursts and teach the child tools to manage them properly.

It’s also advisable to have the involvement of the school and educators. They should be aware of the special needs of these children and the possible side effects of the medication, if they take it. In addition, it will be very important to show consistency, both at home and at school. This will facilitate behavior change in the child.