Discover What Savant Syndrome Is

The peculiarity of savant syndrome is the combination of extraordinary abilities with a low cognitive level. Find out more. 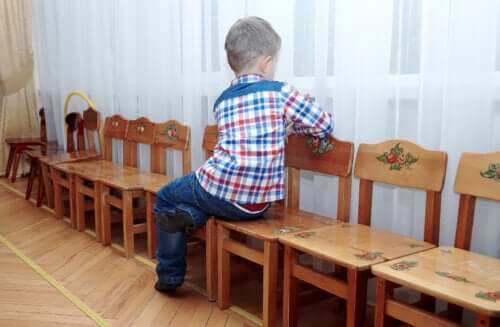 Savant syndrome is a rare condition that occurs when different developmental disorders coexist with exceptional talents and abilities. In this sense, it’s associated with disorders such as Asperger’s syndrome and autism spectrum disorder.

Children with Asperger’s syndrome often have high abilities in music, art, math, memory, and other areas. The clinical diagnosis usually takes place during the child stage.

Although these extraordinary abilities are good for young children, it’s very important to follow the psychological, medical and neuropsychological treatment of the developmental disorder.

What are the characteristics of savant syndrome?

Experts often classify savant syndrome as a child developmental disorder. It involves capacities in certain areas that are above the average of the normal population instead of producing deficits or pathological alterations.

The main characteristic of savantism is to have a low IQ and, at the same time, high capacities in music, memory, art, calculation, spatial vision, sculpture, etc. These capacities are combined simultaneously with great social difficulties, language difficulties, and obsessive interests.

What are the exceptional abilities of savant syndrome?

The talents of people with this syndrome can be focused on only one area or on several. Let’s look at some of the qualities that are most common in savants.

In these skills, individuals with savant syndrome stand out from the general population. Some of them are:

People with savant syndrome have a great talent for musical composition and for playing instruments. Music is one of the most developed areas for them.

They may excel in the use of a particular instrument, such as a guitar or piano, or they may have the ability to play several. They’re able to reproduce music without learning and without musical scores, simply by listening to it. This is true even if they’ve only heard the piece once.

Another skill that savants excel at is math. For example, they have great speed in mental calculations and are capable of performing square roots or multiplications immediately. They stand out when it comes to calculating dates, that is, they can identify a day of the week on a specific date.

In this area, they have a great ability to draw, paint or make sculptures. They have the ability to transfer reality to their works with great fidelity and a great amount of detail.

Although most people with savant syndrome have expressive and social language difficulties, there have been cases of high ability to learn multiple languages.

Some of the people affected with this syndrome have an amazing ability to memorize a great deal of information and data. For example, they can remember numerous data related to historical information, population figures, sports statistics, etc.

While this ability can make them experts in many areas of knowledge, in most cases, their interests are very restricted.

We can divide this syndrome into three different types.

These are individuals who stand out in an outstanding and unusual way in all their capacities. One of the most noteworthy features is that they may have high intelligence or cognitive disability scores.

These are those who have great abilities in different areas as well as a high degree of intellectual disability.

In this case, individuals present very reduced features of savant syndrome. They can have a great visual memory in spite of having difficulties in establishing social relationships. What’s more, they’re usually specialists in a certain area of knowledge.

In conclusion, we can say that people with this syndrome possess extraordinary abilities combined with low cognitive capacities. This makes them geniuses in certain aspects, although they may not seem so due to their deficiencies in other aspects.

As you already know, savant syndrome doesn’t occur very often, but its characteristics are striking. Therefore, its diagnosis is usually relatively simple.

Understanding the Brains of Gifted Children
Most parents at some point ask themselves if their children are gifted. So, is there some way of knowing what goes on within the brains of gifted children? Read more »
Link copied!
Interesting Articles
Childhood psychology
Dermatophagia in Children: What Is It and How to Treat It?