How to Help Children Overcome Their Fear of Public Speaking

One of the questions parents of shy or introverted children ask themselves is what to do to help their kids get over their fear of public speaking. Anyone can have these fears, but there are effective solutions. 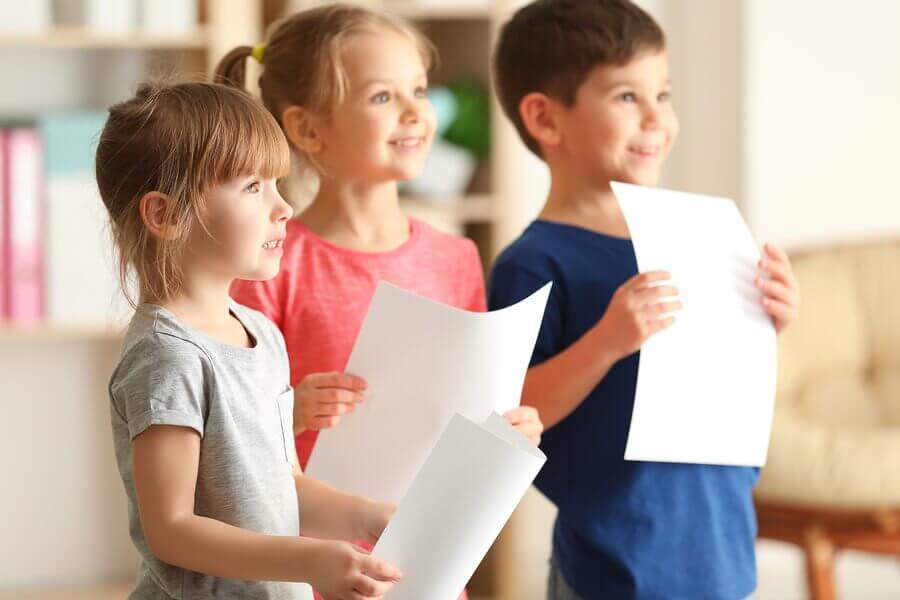 Fear of public speaking is one manifestation of what is known as stage fright. Anyone can have it. For kids and young people, overcoming it appropriately guarantees optimal personal development.

Below we’ll look at some recommended methods to help children lose their fear of public speaking.

Is having a fear of public speaking really a problem?

There are various situations in which children, over the course of their development, will need to speak in public – for example, giving school presentations, professional contexts, or in various recreational contexts.

The first thing to keep in mind before you address the problem in any way is age. Dealing with this issue in childhood is different than doing so during puberty.

For young children, fear of public speaking is normal behavior. Remember that they’re encountering the social world for the first time.

Pay attention to whether the evasive behavior is truly a problem. Watch closely to determine whether it’s a manifestation of extreme shyness, an underlying fear, or if there is something more serious behind it.

If it’s a matter of feeling embarrassment caused by insecurity, the following advice can help you.

If there is a more complex reason behind it, it may be time to seek professional help. Remember that, with any psychological problem, whether serious or mild, self-confidence is crucial to overcoming.

Tips for helping children overcome their fear of public speaking

These tips can be a big help for ridding your child of his or her fear of public speaking:

Some children interact a lot with friends and family from an early age. They tend to be from extroverted, fun families. As they grow up, they don’t see speaking in public as something scary or new. It just seems natural to them.

Don’t laugh or make fun of them

Reprimanding or making fun of a young person only reinforces the bad behavior. The child or young person won’t seek to change.

Don’t make children feel different; on the contrary, the best idea is to convince them that anyone can get scared and they can overcome it.

Leaving children alone with their insecurity will make them more vulnerable and can make them unable to advance.

One of the roles of parents is precisely to accompany and support children as they grow up. This means being present and interacting with them during difficult moments, as well as making sure there is good family communication.

Make them part of the solution

The children themselves should realize that there is a problem. Recognizing it is half the battle. Children have to realize that the discomfort they feel when speaking in public isn’t rational. This way it’s easier to take action to avoid it.

Speaking in front of people doesn’t have inherent value. Rather, it’s part of other goals, projects, and activities. Make the activity fun and pleasant and fill it with positive, valuable content.

“One of the roles of parents is precisely to accompany and support children as they grow up.”

Don’t force or pressure them

If you force children, the thing they are afraid of will become associated with even more negative feelings, which will impede their growth. Likewise, don’t expect the change to be sudden. Everything goes at its own pace.

One helpful piece of advice for public speaking is to practice the whole process, with all its details. Do this several times. That way your children will feel more confident the next time they have to tackle this challenge.

Use role models as an example

Kids and young people have idols that they admire. A good strategy is to use them as examples so that the kids feel more confident.

Don’t make too much of it

Sometimes, children may have a lot of negative thoughts because they’re placing too much pressure on the activity. This creates stress.

Help them put things in perspective and understand that it isn’t life or death and won’t hurt them. Another good idea is to try to channel the fear into creative energy.

When to seek professional help

If these ideas don’t work to help your children lose their fear of public speaking, there may be something else behind it.

If this is the case, it’s time to look for a professional. This will help you get a clear diagnosis, a personalized approach, and appropriate treatment.

How to Work with Children’s Emotions Through Stories
Comprehending and channeling children's emotions through stories is often an excellent solution for strengthening self-esteem. Read more »
Link copied!
Interesting Articles
Raising a child
How to Explain the Water Cycle to Children