If you're facing the challenge of raising identical and fraternal twins, always remember that the most important thing is to encourage them to develop their own personality separately. 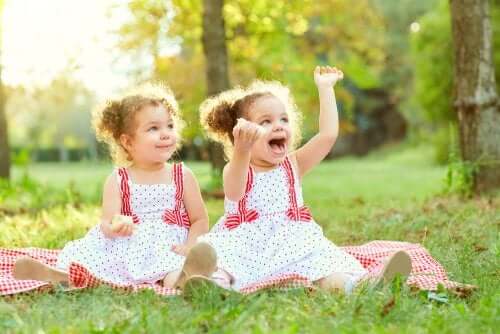 There’s no doubt that the arrival of a child changes the life of any parent. Being a part of the development process of another human being is quite demanding and rewarding. However, these challenges are doubled when it comes to raising identical and fraternal twins.

The number of multiple births has been growing exponentially in recent years. In Europe, for example, Spain is at the forefront, as there’s a 5% rate of children born of twin and triplet births.

This situation is mainly caused by the mother’s age. Due to current social and working conditions, more and more women are deciding to postpone the time of conception, with the average age of first motherhood being approximately 31.

Later age is undoubtedly a factor that multiplies the chances of having a natural twin pregnancy. But no less important is the role that assisted reproduction plays in this equation.

Over the years, it’s become harder for some women to become pregnant, causing many women and couples to resort to in vitro fertilization and similar techniques. These procedures greatly increase the probability of twin pregnancy.

While it’s true that we often colloquially refer to identical siblings that share DNA as identical twins, fraternal twins also fall into this category. The former are monozygotic, while the latter are dizygotic. In this regard, the impact caused by the news of their arrival in the future parents is quite big.

Each case has its own peculiarities. However, the truth is that, in most couples, this unexpected event can cause fear, insecurity, or rejection. Due to the unexpected challenge of raising identical and fraternal twins, it’s common for parents to believe they won’t be able to take care of two babies at once.

For all these reasons, we decided to offer you some guidelines to help you enjoy this challenge.

Undoubtedly, the most important key of all is promoting your children’s individuality. When it comes to raising identical and fraternal twins, parents often treat them as one. However, each twin needs to fully and separately develop their personality.

To do this, it’s important to carry out guidelines as simple as dressing them differently or referring to them by name and not as “the twins.” Also, it’s imperative to respect and promote their freedom of choice. When it comes to preferring toys, extracurricular classes, or interests, you must encourage each twin’s particular tastes.

Finally, it’s also essential to focus on developing bonds separately. It’s necessary for both the father and the mother to split their attention and time between the two children, conduct activities alone and, above all, individually value the virtues and flaws of each twin and avoid comparing them as much as possible.

8 Fun Facts About Twins You Might Not Know
According to statistics, three out of every thousand pregnancies are identical twins. Discover interesting facts about twins that you might not have known! Read more »
Link copied!
Interesting Articles
Behavior
The Positive Three Warnings Technique

Motherhood can be chaotic and it's normal for you to make mistakes every day. You'll make lots of mistakes, but…

Learn how to be a mom
Tips to Combat Postpartum Stress

After delivery, it's normal to feel stressed, as there has been a great change in your life as a result…

Enjoy motherhood
Identity Crises and Motherhood: What to Do

If you think about it, it's almost impossible for mothers not to experience an identity crisis after having a baby.…