The Anger Box for Dealing with Tantrums

The anger box is a technique for dealing with tantrums that can help children learn to better manage their negative emotions. 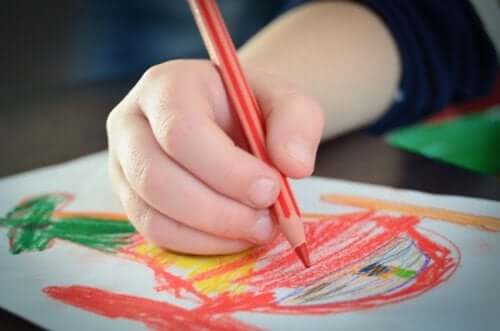 Dealing with tantrums is a challenge that all parents have to face when we have small children. Little ones are unable to manage and control their anger and end up expressing their feelings through tantrums. Fortunately, there are a number of tools and techniques that parents can utilize in order to deal with their negative emotions. And, with that in mind, we want to tell you about the anger box.

Around the age of two, children usually start to express themselves through tantrums. This stage tends to culminate around the age of three or four. However, in some cases, it can last up to the age of seven. This is a stage in a child’s development that can be very complicated for parents. Therefore, finding effective strategies for dealing with tantrums is essential.

Do you want to know how to use the anger box to help children deal with their negative emotions? Keep reading.

The anger box: Why do tantrums occur in children?

Children need to express their anger, but the way they often do so is in the form of a tantrum. When these episodes start appearing, around the age of two, children are incapable of controlling their emotions. That’s because their prefrontal cortex, which is responsible for regulating emotions, has yet to fully develop.

It’s normal for children to express their frustration and anger like an explosion that they can’t control any other way. At this age, little ones are unable to connect cause and effect and, many times, they use tantrums because they don’t get what they want. In other words, they use them to get their way.

Even though tantrums are normal during this stage, it’s important for parents to control them and put a stop to these behaviors when they appear. We know it’s not a simple task and that it requires consistency, patience, and care. What’s more, you can use techniques such as the anger box to help children better manage their emotions.

What does the anger box consist of?

The anger box is a technique created by psychologist Marina Martin that utilizes a children’s story by French author Mireille D´Allancé, What a Tantrum! This activity helps children manage their anger and calm down before they reach their boiling point.

The first step is telling children the story:

The story involves a child (you can give him or her any name you want) that’s had a bad day. Not only at school, but also on the playground with his friends, etc., and nothing’s going his way. Of course, when he gets home in the evening, he has a huge tantrum and starts crying really hard.

In this moment that the child is feeling so angry, he sees a monster come out of him. And he observes how the monster starts destroying everything in sight.

Upon witnessing this havoc, he starts to clean up the mess the monster’s making. As he does, the monster becomes smaller and smaller and finally disappears. (Story based on What a Tantrum, by Mireille d´Allancé).

Each time that anger appears, like in the story, your child will begin to draw his or her anger on a piece of paper. Give little ones a sheet of paper and colored pencils, crayons, or markers. That way, they’ll channel their emotions by depicting them on paper and, in doing so, they’ll relieve their anger and frustration.

When they’ve finished drawing, then they can add eyes, feet, and hands in order to turn it into a monster. In most cases, children will express their anger in the form of a scribble. If they draw something else, that’s okay, because it’s their way of expressing the emotion they’re feeling.

Once children are finished making their monster, you’ll ask them to crumple the paper into a ball and put it in a box. This is the anger box, a place just for anger monsters. Once the monster’s in the box, he can’t escape, and your child will be free of that negative feeling.

Conclusions regarding the anger box for dealing with tantrums

The objective of the anger box technique is to help children gain awareness of what this negative emotion feels like and learn to control it. The technique redirects anger toward more positive emotions in order to prevent tantrums and aggression. So, what are you waiting for? Tell your child the above story and, next time he or she is feeling angry, you’ll know just what to do.

“The Color Monster” – 3 Lessons for Kids
If you're looking for a fun and educational book that your kids will love, you just found it: "The Color Monster." Keep reading to learn more. Read more »
Link copied!
Interesting Articles
Emotional education
Teach Your Children Not to Take Things Personally