Why Some Kids Try Harder Than Others

Some kids try hard to get what they want, while others refuse to do it. Actually, how parents praise their kids is somehow related to this. Do you want to know why? 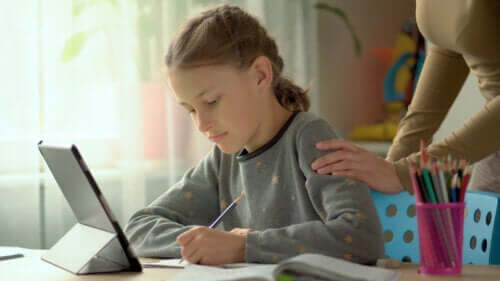 Some kids try harder than others. Even if you raised them in the same way and with the same values, you’ve probably seen one of your children making great effort to get what they want, while others just don’t. Why does this happen? In this article, we’ll tell you why.

Certain children are quite independent form an early age. So, they want to do things on their own, and they try really hard to get what they want. On the contrary, some children are very dependent, and they just live the law of least effort: if they fail at something, they don’t try again.

In this article, we’ll learn the difference between two raised equally, yet different kind of children.

Why some kids try harder than others

Psychologist Carol Dweck has worked for many years on investigations regarding effort, perseverance and motivation in children. Then, she concluded that there are two types of mindsets, depending on the children’s attitudes towards effort:

To understand these two types of mindsets, we’ll give you an example. When children learn to write, if they try once or twice to write a word and they fail to do so, they’ll think they just don’t have the ability to do it. On the other hand, children who believe in making an effort will continue practicing until they manage to do it.

Characteristics of children that have a fixed mindset

Characteristics of children that have a growth mindset

Some kids try harder than others, depending on how we praise them

Now it’s time to ask ourselves, why do some kids believe that making an effort will help them get what they want while others don’t? According to Carol Dweck, it’ll depend on how parents, family members, friends, etc., praise children. So, we can talk about two types pf praise:

Can we be praising our children differently without noticing it?

We can examine our conscience and check if we’re praising our children differently. Remember that there’s always time to correct your mistakes.

Try to start by replacing phrases, such as “Leave it, I’ll do it” for “You should try it” or “See how good you are at it?” for “You’ve done it because of the effort you made, good job.”

Our minds will be able to change, if we receive the proper praise that’ll help us modify our attitudes towards effort and the way we face life.

Now you know why some kids try harder than others. It’s important that you check the kind of messages you send them with the words you choose to use. We all want to encourage our children to become successful people in the future, but sometimes, we mess it up in the way we do it.

Remember that it’s never too late to correct our mistakes. Choose to praise for effort, instead of praising for intelligence. Compliment their perseverance and motivation to get what they want.

How to Praise Your Children Equally?
It can be tricky to praise your children equally. Although it isn't particularly difficult, it does require attention, tact and wisdom. Read more »
Link copied!
Interesting Articles
Emotional education
Solomon Syndrome in Children: What Is It? How Can You Avoid it?