The Grammar of Fantasy, by Gianni Rodari, is a great resource for developing language creativity thanks to the multiple techniques it proposes. Are you ready to discover more? 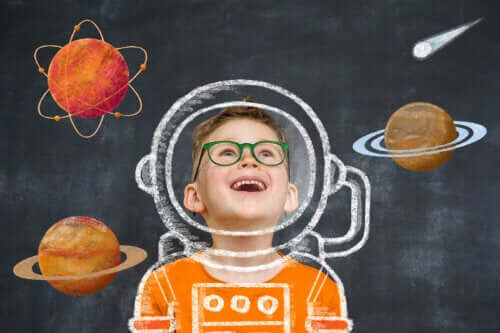 It’s important for children to develop language creativity, to play with words and approach them without fear, addressing the phonological and semantic nature and syntactic possibilities. According to Gianni Rodari, developing fantasy and the ability to communicate gives children the possibility of defending themselves.

Italian teacher, pedagogue and writer, Gianni Rodari, offers creative resources to tell stories and play with words. In doing so, he teaches us how to develop language creativity in our children.

Rodari began writing for children in 1950. During his career, he published more than 20 books in which he masterfully combines humor and imagination with an ironic vision of today’s world. In 1970, he received the most important award for children’s literature: The Hans Christian Andersen Prize for Literature.

In his book Grammar of Fantasy: An Introduction to the Art of Storytelling, Rodari proposes several ways to invent stories for children and to help children invent their own stories.

Playing with words and telling stories

Now, we’ll look at some of Rodari’s techniques in this regard. These techniques aim to awaken and develop language creativity as well as imagination and fantasy. Not only are his techniques useful for children, but for youth and adults as well.

The china in the pond

Giani Rodari starts from the idea that “a word thrown at random in the mind produces superficial and deep waves.” In other words, it produces associations, sounds, images, memories, fantasies… Therefore, it’s a matter of giving children a word and then working with the content that they come up with.

For example, let’s look at the word “Chinese” which may inspire words that:

Once they’ve come up with these possibilities, great texts can emerge thanks to the simulation of imagination. Kids can also tell stories or sensations that the word produces.

This activity involves choosing two words at random – two words that have a certain distance between one another. In other words, one has to be very strange and unusual in relation to the other. That way, the imagination must work even harder to create a kinship between the two. Some binomials could be: Brick-song, Little Red Riding Hood-helicopter, light-shoes, dog-cabinet.

Through these binomials, children can establish relationships between them by linking them with a preposition and the corresponding articles. Thus, they obtain the following:

Each of these options offers the outline of a fantastic situation that you can use to create great stories.

What would happen if…?

Hypotheses, Novalis wrote, are like nets: “You throw out the net and sooner or later you find something.” This is a very simple technique, based on the question: “What would happen if…?

To formulate the question, you choose a subject and a predicate at random. Their union will provide the hypothesis upon which children will work. “What would happen if an elevator went down to the center of the earth, or if it went up to the moon.” “What would happen if a crocodile knocked on your door asking for salt?”

The spirit of this game is to use an arbitrary prefix in order to form new words out of those that already exist. The prefix un- has the capacity to transform a saw – a dangerous, everyday object – into an unsaw, an imaginary and peaceful object. Rather than cutting down trees, the unsaw makes them grow taller and stronger.

One option for using an arbitrary prefix is to make tables of prefixes and nouns. Then, put them together at random and have children define the word and tell stories.

“Those who write are, basically, those who feel the need to order the facts they observe and give a meaning to life. But both are useless if, at the same time, they are not accompanied by a love for the words themselves and by the irrepressible desire to play with them.“

From a slip of the tongue a story can be born. A misspelling can give rise to all sorts of comical and instructive stories. Let’s imagine that a child writes the following phrase: “The tree of lite.” On the one hand, we have the option of correcting the mistake. On the other hand, we can go with the flow and write a story about the characteristics of this wonderful “tree of lite.”

We can create fantastic themes and stories through games as simple as cutting out newspaper titles and mixing them up to create news of absurd, sensational, or simply silly events.

Whole poems can be composed with just a pair of scissors and a newspaper. Perhaps they won’t have a lot of meaning, but they’ll have charm. Another game that’s widespread throughout the world is that of cards with questions and answers. It starts with a series of questions and, on the other hand, a series of answers that are joined at random.

Children receive a list of six words to use to make up a story. The first five allude to the story of Little Red Riding Hood: girl, forest, flowers, wolf, grandmother. However, the sixth one breaks the pattern: helicopter. With this new word, children will enjoy the pleasure of invention. The same can be done with any other story.

The premeditated reversal of stories.

For example: Little Red Riding Hood is bad and the wolf is good…

Or Tom Thumb wants to run away from home with his brothers, abandoning the poor parents. But his parents are smart enough to make a hole in his pocket before filling it with rice, which then spreads along the way during Tom’s escape. It’s similar to the original story, but seen through a mirror where left becomes right.

Even if you’ve already finished the story, there’s always the possibility of a sequel. The characters are already in place; we know their behavior; we know what relationships they have with each other… The simple introduction of a new element sets the whole mechanism in motion. Who hasn’t written or imagined sequels of Pinocchio or Cinderella?

Conclusion on developing language creativity according to Gianni Rodari

In short, as you’ve seen, there are many techniques suggested by Gianni Rodari in his work to develop language creativity in children and adults. What are you waiting for to put them into practice with your little ones and enjoy fun, entertaining, and educational moments with your family?

10 Ways to Encourage Reading and Writing in Children
Here are 10 ways that families can help encourage reading and writing in their young children. It's very beneficial for them. Read more »
Link copied!
Interesting Articles
Raising a child
How to Explain the Water Cycle to Children