Today we'll discover a little more about one of the favorite characters within children's literature: Elmer the Patchwork Elephant. 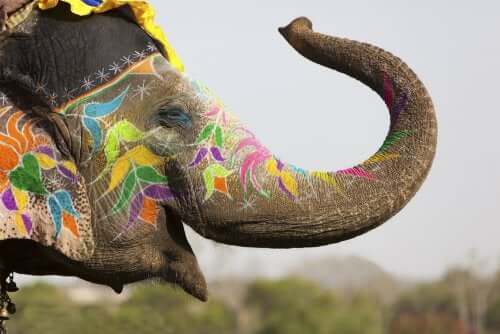 There are certain books within children’s literature that dazzle their audience in a unique and meaningful way. One of them is a book starring a colorful elephant that goes by the name of Elmer. Elmer stands out among children’s books so much so that some eight million copies have been sold.

Below, we’ll tell you a little more about this fantastic protagonist and the reason – or reasons – for his enormous success.

If you’ve enjoyed or been able to get your hands on an Elmer book, then you know what we’re talking about. By just glancing at the book, you’ll discover a cover that’s full of colors and a portrait of our main character: Elmer.

However, as you can see, Elmer’s not an elephant like the others. While Elmer’s surrounded by the typical gray elephants we all know, his own skin is full of a wide variety of colors.

At the beginning of the story, Elmer feels totally different from the others because of his colors. The feelings of sadness and shame that invade him lead him to escape from the herd, looking for a remedy that will help him be like everyone else.

After numerous attempts, the protagonist ends up realizing that being the same as everyone else is very boring. He likes to be different! And, besides, he’ll have the support of the rest of the herd, who also loves Elmer just the way he is.

The values of this fantastic story

Despite the fact that the book’s aimed at a public that’s around four years old, the message and the values it teaches are deep and moving.

The value that stand outs the most perhaps, is self-acceptance – loving yourself just as you are.

As we indicated earlier, Elmer is a colorful patchwork elephant. His skin makes him totally different from the rest of his herd. Far from treating diversity as something negative, this story does the opposite and treats it in a very positive way.

In fact, the entire herd that Elmer belongs to reflects this positivity, as they themselves are delighted that he’s different. And this leads us to two other fundamental values that this book encourages: Respect for others and integration.

Bullying is increasingly present both inside and outside the classroom from an early age. This is due, in many cases, to the use of the internet and social networks.

For this reason, it’s essential to transmit this set of values to children, which they must apply in their own lives. We must teach them the importance of accepting all of their classmates, regardless of their background, appearance, preferences, or beliefs.


Another value that’s very present in the story of this patchwork elephant is that of promoting self-esteem. In the story, we see how Elmer is the first one who wants to change because he doesn’t feel comfortable with the colors of his skin.

However, little by little, and always with the help of his pack, he learns to appreciate his differences more and more.

Although the success of this unique elephant is rather recent, the first of his books was actually published in 1968 by David Mckee.

To date, there are 41 books that make up the collection, each one dealing with different simple topics for children. And of course, Elmer is the main character of all of them.

This series of books helps children work on other concepts and values, besides those we already mentioned above. Colors, different animals, and different climates that occur throughout the year are some of the most prominent themes.

Although Elmer is the undisputed protagonist of these stories, in a large number of them he’s accompanied by another animal. The author of this fantastic book collection is aware of the love that children feel for animals, which is why he’s included so many of them.

“Four Little Corners” – 4 Valuable Lessons from the Book
Four Little Corners is a book that every child should read. If you're looking for a way to teach your child about values, this is a wonderful option. Read more »
Link copied!
Interesting Articles
Children's stories
Children's Books About Christmas Magic