Today's teenagers live in a hyper-sexualized world. They have pornographic content at their fingertips at just a touch of a button; without any restrictions, they can watch pornography freely. 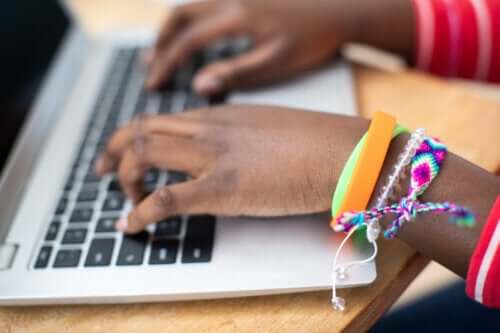 A lot of research shows that teenagers that watch pornography can create problems for themselves in maintaining satisfactory sexual relations. They even say that if this consumption is very common, it can lead to certain addictions.

What’s more, the consumption of pornography has increased in the last two decades. The most worrying thing is how young you can be when you have your first contact with pornography. In fact, there are children as young as 10 who already watch adult content.

According to the Pediatrics and Adolescence Unit, the average age that teenagers begin to consume pornography is increasingly younger. Between the ages of 12 and 14 in the case of boys, and 16 for girls. Statistics also say that 1 in 4 starts watching pornography before age 10; some children even have their first experience with pornographic images as young as 8.

This practice a few years ago wasn’t so early or so massive. Today the internet and other new technologies make the free use of pornography available to pre-teens and teenagers without any restrictions.

The use of mobile phones at a very early age, the curiosity of teenagers, and the ease of access to pages with pornographic content, entices them to look for explicit pornography. Over time, they’ll search for increasingly transgressive images to seek greater pleasure. This practice can affect them in several ways, since their brain doesn’t yet have a well-formed sexuality map.

Effects of the consumption of pornography at an early age

Emilio López Bastos, psychologist and sexologist, as well as vice president of the Spanish Federation of Sexology Societies, warns that the regular and early consumption of pornography can lead to sexual dysfunction. Among them, erectile dysfunction, premature ejaculation, and difficulty reaching orgasm.

And teenagers that watch pornography at a very early age will eventually need an increasingly strong visual stimulus to get a pleasant sexual response. They move from softcore pornography to hardcore.

To further expand, at the brain level, dopamine discharges are produced that generate intense reactions and are very similar to those that occur when taking addictive substances. Therefore, like other addictions, watching pornography regularly at an early age can generate physical, mental, psychological, and social problems in teenagers.

You should bear in mind that the effects will be more intense the younger the age of exposure, and the more extreme the pornographic content. This is because, as we already mentioned, children don’t have a fully developed understanding of sexuality at 12 to 14 years old. Their brain isn’t yet psychologically developed to process these images, causing the perception of sexuality to be distorted.

If a boy starts to consume pornography at a young age, he’ll have a wrong idea about sex. In the real world, he’ll look for something similar to what he saw, but won’t find it, because human sexuality has little to do with what is seen in pornography.

Moreover, the very negative thing that pornography has is that, in general, it’s very “macho” and conveys some myths and misconceptions about sexuality. That is why, over time, both boys and girls will end up distorting those emotional-sexual relations with their partners. As a result, they’ll end up assimilating that:

What can family and school do?

As we already said, curiosity and use of cell phones at an early age make accessing the internet easier, which leads them to pornographic websites more frequently and early. Thus, sex education, both at home and in school, is becoming increasingly necessary.

As a family, we need to prevent and stop our children from consuming pornography at an early age. However, the most practical way to prevent them from viewing pornographic content is through parental control programs. Through them, we can restrict content, web pages and limit data usage and limit time.

However, the best way to prevent the consumption of pornography is proper sex education. It’s important to talk to our children openly, explain the difference between real sexuality and pornography. We also need to teach them equality, and let them know what they should and shouldn’t accept in their sexual relationships.

Things to know about teenagers that watch pornography

The consumption of pornography is an increasingly widespread and frequent practice among teenagers. Starting to watch pornographic content at an early age will cause boys to have a wrong idea about sexuality.

Additionally, viewing pornographic content frequently will cause teenage sexual problems. They’ll have such a high threshold of pleasure because of pornography that they won’t enjoy sex with their partner.

Therefore, from the family and the school, the use of pornography must be prevented through proper sex education. Teenagers must be advised in the process of their sexuality. Not to censor, but to create the critical capacity to differentiate pornography from sexual-affective relations.