Helicopter parenting is a name used to define overprotective parenting. In this article, discover what this phenomenon is and how to recognize an overprotective mother or father. 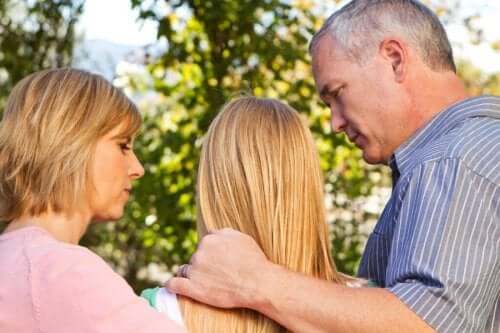 All parents can confirm that children don’t come with instruction manuals. Helicopter parenting is a child-rearing method that can have harmful effects on little ones. In this article, find out what it is and the negative consequences it can have on your children.

For many experts, helicopter parenting is a current phenomenon that involves excessive parenting. It’s a concept established by Eva Millet, author of the book Helicopter Parenting, which precisely explains the characteristics that define these parents.

Millet argues that this method makes parents think that children require overprotection and help to solve all their problems.

It’s estimated that this child-rearing method emerged in the United States and has spread to countries with high living standards. This phenomenon defends the premise that parents need to prepare their children for the future.

That’s why they take them to numerous extracurricular classes, sports, and language courses, among other activities. Also, they usually give them the latest toys and enroll them in the most expensive schools.

The term “helicopter parent” came from author Haim Ginnott, who wrote about his mother hovering over him like a helicopter.

How to recognize an overprotective parent

Children are expected to become brilliant and successful adults without having to work for it. That’s why this behavior is unhealthy. Some of the common behaviors in these types of parents are:

Although children need to be protected and cared for, this method psychologically exceeds healthy limits. Some parents have even come to accuse their children’s teachers of being incompetent when told that their child is misbehaving or is doing poorly in school.

Multiple reasons stimulate helicopter parenting in modern society. In some cases, it’s caused by having children at a later age, product of a long and painful fertilization process.

It’s also caused by childhood trauma, pressure to avoid emotionally distancing themselves from their children, or fear that their children will fail. This last reason is also related to the insecurity caused by the global crisis that has led parents to try to make their children mature in an ill-advised way.

The direct consequences are very tired parents with inefficient children. This child-rearing method has been criticized by experts because it can cause anxiety and depression in parents. This is because they have to carry a huge responsibility on their shoulders, so much so that it even becomes a chore.

In children, the consequences are often sadder and more painful. Overprotected children are invaded by fear and insecurity, become unable to make decisions, and have to deal with feelings of frustration. They may even fail to become autonomous, connected, and competent adults.

In conclusion, the best way to fight helicopter parenting is with a loving and dedicated upbringing. This type of upbringing allows children to learn, explore, and develop to become independent and autonomous. In addition, it helps parents feel satisfied with the fact that they’ll raise children that will contribute positively to society.

The Dangers of Parental Overprotection and Helicopter Parenting
Parents need to let children develop their own creativity and initiative. They also need to remember to avoid helicopter parenting. Read more »
Link copied!
Interesting Articles
Raising a child
How to Explain the Water Cycle to Children